April 29, 1905Marianna, Florida5:45 p.m. After Long had shut the door behind him, and I knew I was all alone, I turned again to gaze out of the window at the courthouse; the shadows of the oaks around the building growing longer with the sunset. I didn’t want to go […]

April 29, 1905Marianna, Florida4:30 p.m. Although my office door was ajar, there was a slight knock. It was Long. “Here’s the afternoon mail,” he said, placing a stack of letters and a rolled up newspaper on my desk. “Anything you need doing before I leave?” “No, nothing. Have a good […]

April 28, 1905Marianna, FloridaWilson & Wilson11:40 am The windows of the second floor law offices of Wilson & Wilson, were open; even though it could get a bit stuffy in April; there was a fresh breeze blowing gently into the outer office/reception room.  At the large oak desk in the […]

March 26, 2015Chevy Chase, Maryland Back in the mid-1980’s, when I was a year or so out of journalism school with some experience writing for daily newspapers under my belt, I got the itch to move on to a bigger newspaper market, with a more interesting beat, and more exciting […] 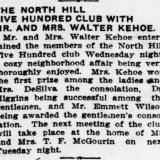 August 4, 2020Chevy Chase, Maryland I think the most useful tool I’ve had in putting together Emmett Wilson’s research is an extensive timeline, broken down across the decades of Emmett’s life, in which I’ve organized every single article or information source, by chronological date. Anything that mentioned Emmett in any […]

June 2, 19047:50 a.m.Marianna, Florida When I got off the train from Chipley this morning, the first thing I did was head over to Cephas and Lula’s house, to drop off my satchel, change clothes and then to head to the office. I put on my best three-piece black suit […]

October 2, 2015Marianna, Florida After touring St. Luke’s Episcopal Church, Sue and I continue to walk around downtown Marianna; she points out several buildings that are still standing from Emmett and Cephas’ time — The Acme Restaurant, Dr. Wilson’s office (no relation to Emmett, Cephas or Frank Wilson of Chipley), […] 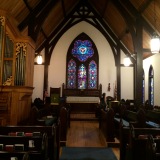 October 2, 2015Marianna, Florida Sue and I walk down Lafayette Street, also known as US 90, towards Jefferson Street, where we turn right, and walk for two more blocks. It’s mostly businesses and a church; there were homes here once upon a time. There’s an old house or two that […]

October 2, 2015Jackson County CourthouseMarianna, Florida Sue Tindel, the Jackson County Court Archivist, is one in a million. She’s also someone I’d been corresponding with regularly over a year, and so, when I met her, I’d felt like we’d been friends for a long time. Sue is a fantastic lady. […] 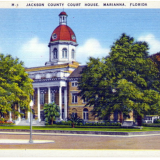