Chapter 81: Don’t Be A Stranger

May 29, 1904, late afternoonChipley Florida After Walter and Frank Mayes left the house, I picked up my satchel, put a book and an apple in it, and took a walk downtown. I didn’t expect anything to be open late Sunday afternoon; I wanted to get away from the house, […]

In the early 1900s, if you got your name in the newspaper, it was a big deal. It indicated prominence in your community. In Pensacola, these columns were mostly found in the Society section of the paper, with little headings over each news blurb; if you were a businessman or […]

May 29, 1904Chipley, Florida No one met me at the depot in Chipley when my train pulled in right before 11 am, but I didn’t expect anyone to on a Sunday morning. Most everyone around here is in church at this time. The few who are milling around are here […] 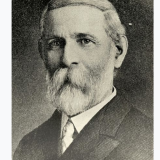 May 28, 1904Marianna, Florida When I got home to Marianna, Cephas and Lula had a congratulatory supper at the house, just family members. At the table, Lula insisted on hearing about the ceremony, the speeches, and the celebration afterwards at the President’s house. After dinner, when we gathered into the […] 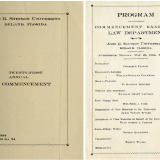 May 23, 19049:15 pmJohn B Stetson University AuditoriumDeland, Florida The auditorium was crowded, hot and stifling, with guests in finery and suits, students, and graduates wearing three-piece suits under silk robes. Even though it was after 9 pm, men were fanning themselves with their straw hats and ladies who had […]

Another anniversary — 102 years ago today. 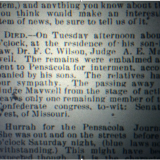 May 10, 1903East Hall, Stetson UniversityDeLand, Florida Grandfather died on May 5, 1903. I was there. I ran all the way home from the depot as soon as I got off the train, not waiting for a carriage. The house was full of family and friends. My mother’s brother, Uncle […]

May 19, 2020Chevy Chase, Maryland I believe there were several reasons why Emmett and Pearl’s romance ended right after Emmett graduated from Stetson University in 1904: It was a long-distance relationship. Even today, with cars and technology such as Skype and ZOOM, it is hard to maintain a romantic relationship […]