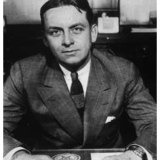 September 15, 2014 Chevy Chase, MD My relationship with Sue Tindal, Deputy Clerk, Jackson County (FL) Clerk of Courts began with a cold call — a cold email message — actually. I admit I dithered over it for a week or more. After decades of being in this business I […]

Chapter 81: Don’t Be A Stranger

May 29, 1904, late afternoonChipley Florida After Walter and Frank Mayes left the house, I picked up my satchel, put a book and an apple in it, and took a walk downtown. I didn’t expect anything to be open late Sunday afternoon; I wanted to get away from the house, […] 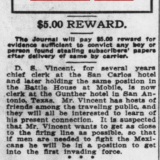 In the early 1900s, if you got your name in the newspaper, it was a big deal. It indicated prominence in your community. In Pensacola, these columns were mostly found in the Society section of the paper, with little headings over each news blurb; if you were a businessman or […]

May 29, 1904Chipley, Florida No one met me at the depot in Chipley when my train pulled in right before 11 am, but I didn’t expect anyone to on a Sunday morning. Most everyone around here is in church at this time. The few who are milling around are here […]

May 23, 19049:15 pmJohn B Stetson University AuditoriumDeland, Florida The auditorium was crowded, hot and stifling, with guests in finery and suits, students, and graduates wearing three-piece suits under silk robes. Even though it was after 9 pm, men were fanning themselves with their straw hats and ladies who had […]

Another anniversary — 102 years ago today.

May 2, 2013Chevy Chase, Maryland The more I learn about Pearl, the more I get her. And I like her, for a lot of reasons, though I wasn’t sure I would once I started digging around — but Pearl was unique, surprisingly so, and wanted to make something of herself. […]

Chevy Chase, MarylandMay 1, 2013 A cold cup of coffee sits on the desk next to me; it’s been there so long that the cream has risen to the top and it has a weird looking brownish skin/scum across the top. I never ignore a good cup of coffee, but […]