What I love about Katie’s narrative about her family’s years in British Honduras are the anecdotes. She’s a wonderful storyteller, sharing family experiences in detail. I wish she were still alive — I would love to interview her.

We had a plague of locusts one time while in Honduras; the ‘big” boys and a young uncle visiting from the “States” went out with their machetes and had fun trying to kill them but it was impossible because the things rained down too thick. They stayed only about an hour and disappeared, leaving a few stray ones lying around dead.

Great mahogany trees grew in the forest, and once a native (in the spirit of gratitude to Father for some kindness shown him) carved a beautiful walking cane out of a solid piece of mahogany and presented it to Father. It had a round knob on top and the man shined it up, and it was used in the family for many years. It is now in the possession of my youngest Brother’s son, who is a doctor in Rochester, N.Y.

Another native carved a huge shallow bowl from a mahogany log and presented it to Father, and it was used every day to make bread and biscuits.

Father was commissioned by the English Government to vaccinate the natives against yellow fever. He did this by getting a boat and traveling up and down the coast, the only way to reach them. Some of these people had worked on his place and once he noticed some of Mother’s big silver spoons. He picked them up and said his wife had been wondering where they had gone. There was no protest. They had sense enough to know he was right. They had Mother’s monogram on them.

For this work the Government paid in gold. So when he got home he called us all in to see this gold — large tin box full. I put in both hands and played in it. A child of today would  have to go to Fort Knox to do that!

One interesting occurence was when we moved from our first house to “Big Hill.” Sister had a parrot that could talk. She used to stand and call my brother in a voice exactly like mother’s. Well, the parrot got away and flew into the jungle while the family was busy with their moving. No-one noticed she was gone till they arrived at the new home. Then every one was distressed because Ada (the parrot’s name) was missing. This lasted a week. Then one morning, we were sitting in the house with Mother and we heard the voice calling, “Maxwell, Maxwell” on the same high note that Mother used — but there sat Mother right in the room with us! We hurried out side and there was old Ada on the roof looking down on us with a twinkle in her eye!

Ooooh, lots of background in this page! 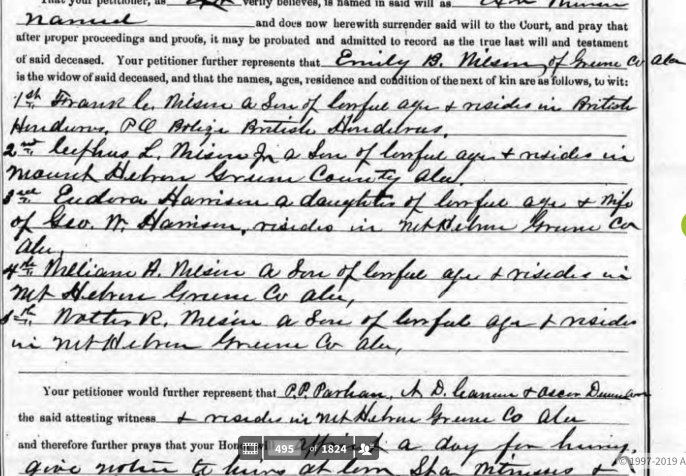 This is a page from Dr. Wilson’s father’s will, which was written while several of Emmett’s family had emigrated to British Honduras. Several Wilson brothers are still in the U.S., namely Cephas Jr. (not Emmett’s brother, but yet one of many Cephases in this family) who ultimately moved to Virginia), William, and Walter or Walker. Source: Ancestry.com

The Simeon Maxwell family sailed out of Belize on the E.B. Ward, Jr., into the port of New Orleans on October 22, 1879. Emmett’s grandfather left about this time as well; Emmett’s parents would stick it out until 1884, when they pretty much had lost everything in the failed sugar plantation venture. Source: Ancestry.com

Big Hill is a resort in Belize today. But since the family story is that Dr. Francis Wilson only had a part ownership, was this perhaps a Wilson family compound? Another mystery unfolds in Emmett Wilson land….

Hang in there; page five is next.