She said she’d get back to me after she and another archivist over at the law school dug around a bit more. Angela got back to me yesterday with an update.

The answer: Most likely.

However, the law school archivist found something very interesting from the Stetson Weekly Collegiate for April 30, 1904:

The diplomas appear to have been in Latin. Why Latinize a graduate’s name and not the entire document?

With this information, I believe the diplomas WERE in Latin. Why go to the trouble to Latinize just the names and not the whole document? It wouldn’t look right. So, I’m going with the idea that Emmett’s diploma was, in fact, in Latin.

The professors identified in this article, by the way, are Edwin G. Baldwin, A.M., professor of Latin (and an avid beekeeper), and Mrs. G. Prentice Carson, instructor in domestic science. They were not Emmett’s professors. I take it these faculty members were drafted to the task. 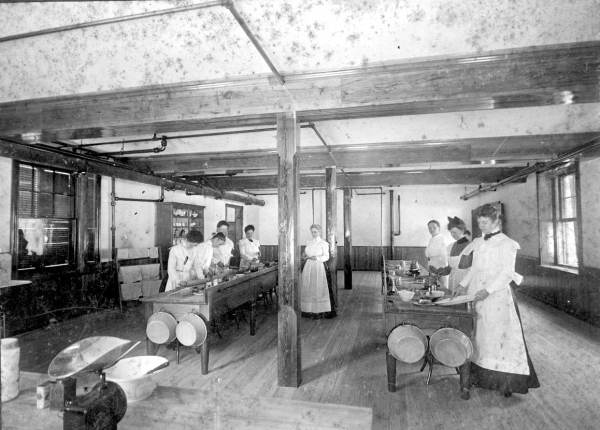 Mrs. G. Prentice Carson is the first on the left, doing something ‘domestic’ in the Domestic Science Lab, basement of Flagler Hall, Stetson U. Image source: Florida Memory.com

I wondered what name Professors Carson and Baldwin ‘quibbled’ over? Who was the scholasticus ab difficile nomen?

Of course, the professors could have been wrestling with the name of a student graduating with a Bachelor of Arts degree, but just for the heck of it (and for lack of infinite free time), I focused only on Emmett’s law school graduating class. To start with, I ran the law school graduation class names through the University of Notre Dame’s English to Latin Translator.

Here’s the list of the students that graduated in 1904.

As you can see, the translator doesn’t work with proper nouns, unless the names were also regular words, such as ‘butler’ or ‘hall’, which has a Latin equivalent.

For example, if you had a name that was commonly used during Roman times, such as John or Mark, your translation is relatively simple: Iohannes and Marcus.

But one of the points made in the discussion is something I’m sure Professors Carson and Baldwin were wrestling over: What if you have an unusual name like “DeShawn”? How would you translate that into Latin?

In general (according to the experts in the Latin discussion thread), the proper noun should fit into a standard Latin declension, and it is best to keep the name as close to the original language as possible (i.e., John Cusack = Iohannes Cusaccus). One of the most common treatments of this is to add -us or -ius to the end of names ending in consonants; but, there are variations to this rule. Oy. Dan Nicholson, author of Orthography of Names and Epithets: Latinization of Personal Names, explains it more at this link.

After this little research side trip into what Emmett’s law school diploma probably looked like, all I have to say is that I can see why there was some quibbling. Latinizing a proper name wasn’t always about slapping a -ius at the end; the rules could vary. This was not an easy task for Professors Baldwin and Carson. I hope they were at least compensated for the effort.

Based on this information, I believe each student’s name was Latinized, and not left alone. For instance, the Latinization of William Bloxham Crawford’s name on his diploma would have been “Willelmus Bloxhamius Crawfordius”.

I would love to find Emmett’s diploma. I was secretly hoping it would turn up in Stetson’s archive. 🙂 Maybe it will still turn up.

Thanks very much to Angela and her archival colleagues duPont-Ball Library and Hand Law Library at Stetson University for their help with this question.

PS: I think the student name that Carson and Baldwin had the problem Latinizing was that of Margaretha Elisabeth Duvinage Remmers (Bachelor of Philosophy). It was not only the longest name on the diplomas given that  year, but her third name, “Duvinage,” was unique.