On April 27, 2013, I called the West Florida Genealogical Society in Pensacola, and spoke with researcher Peg Vignolo. I introduced myself, and explained what I was looking for.

“Nope,” she told me after checking several resources. “We don’t have anything on Emmett Wilson other than what I’d already found about him myself on the Internet,” which isn’t a whole lot, she added. I agreed.

Peg said it was curious that there was such little information, given that he was the youngest U.S. Congressman at the time, and the first from Pensacola after the new congressional district was formed in 1908. 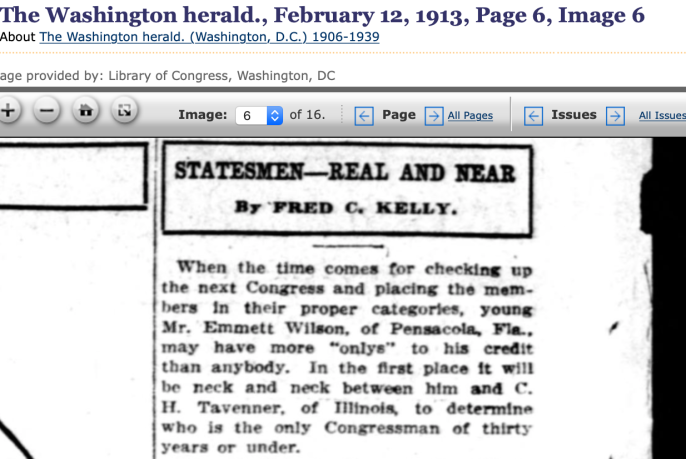 I mentioned the date of his death, and asked for a copy of his obituary, if they had copies of The Pensacola Journal from 1918, since the 1918 edition of the paper didn’t seem to be on microfilm yet, or available via ChroniclingAmerica.gov, the online newspaper repository at the Library of Congress.  Peg said that they had the bound issues of The Pensacola Journal for May 1918, and would be happy to make copies and email the obituary to me.

“May 1918, huh…,” she added thoughtfully. “Maybe it was the flu. The pandemic hit West Florida pretty hard in 1918. It devastated many families here in Pensacola.” I told her I wasn’t sure, but what little information I had at that moment suggested he’d died at home, so it was a possibility.

Peg recommended that I next contact the Pensacola Historic Society (now known as the UWF Historic Trust).  “They have a large archive on prominent locals; if there’s anything on Emmett, it would likely be there.”

Meanwhile, she’d hunt for the obituary, and refused payment. In gratitude, I emailed some of the articles I’d found already so that she could start a surname folder for Emmett.

A few hours later, Peg emailed three articles to my faculty email account, one each on Emmett’s death, obituary, and funeral. She mentioned it was curious that he garnered not one but three articles in the local newspaper, something unusual about a person of suggested prominence but lacking a file in their historical archives.