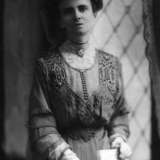 Our last sibling essay in Emmett Wilson’s family story focuses on the youngest son, Walker Wilson. Walker was born in Chipley, Florida in 1884, six months after his family emigrated back to the U.S. from Belize, when Emmett was two years old. I have a few clips from the Chipley […]