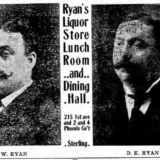 January 18, 1906Sterling, Illinois I returned to the office late in the afternoon, after spending a day and a half in Morrison, at court. Our office secretary, Miss Delp, handed me a few letters in a folder that required my signature. No other messages? I’d asked. “No, Mr. Wilson”, she […]