That was my first reaction to Emmett Wilson when I ‘met’ him several months ago.

I was in the midst of doing work on a biography about my great-grandmother, who, long story short, was a suffragette from Mississippi, and whose husband did not like her ‘activities’, so he put her into a mental institution.

It was as I read the transcripts from the National American Women’s Suffrage Association (NAWSA) meeting with Woodrow Wilson (my great-grandmother was in attendance), that I saw a few ‘gentlemen’ congressmen had been hand-selected to heckle the women as they made their case for voting rights. They were listed as “Interrupters” in the meeting transcript. The names were listed, all right. One of them was Emmett Wilson, a young congressman, newly elected from Pensacola, Florida. 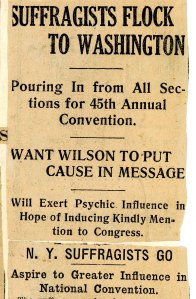 I stopped to look at Emmett’s bio, just to see what kind of man would kick chairs around in the back of hearing room, clear his throat loudly for no other reason than to be obnoxious, and so forth. Turns out he had a short, less-than-spectacular tenure in Congress: Only two terms, and didn’t even get the nomination of his own party for a third term, went home to practice law, then died the following year.

I specifically recall saying to myself, “What a jerk. Serves him right.” Then, I continued reading the transcript.

About a week later, it was about midnight, and I was looking through an obscure archive of photographs from the Library of Congress featuring the NAWSA protests (which preceded the hearing). It was quiet, no one else was around or awake, and I was completely focused on the task at hand.

In the middle of the photographs was one of a young man, in profile. I hadn’t seen it before; it seemed out of place and without context in the archive. The thing was, the photo was compelling. There was something about this man… I didn’t know what it was. But I stopped what I was doing, and looked at the source information on the photo. It said:

The photo that got my attention. Source: Library of Congress

I kept staring at the photo; I knew the name. I remembered the NAWSA transcript…and then, out of nowhere, I hear the words, clearly, plainly:

It made me pause; I thought I was just tired and out of it. Again, I hear, clearly: “Tell my story.”

So, I started looking up information about Emmett Wilson. There wasn’t much out there; whatever I was going to find was going to take some effort. Despite the challenges of finding anything on an obscure former congressman like Emmett, I feel like I’ve been led to where I need to look. There’s a process to doing research, but still, I also sense, at times, Emmett’s in the room with me as I scroll through endless reels of microfilm, or read old records about his work.

And then, four months into the research, I discover that Emmett Wilson is my cousin, on my mother’s side. The connection is distant, but it is definite. My great-grandmother the suffragette was on my father’s side; never the twain would meet. To say I was floored is an understatement. I remember when I discovered this, how I felt chills run down my spine.

I think most of the time, as I gather information to write Emmet’s biography, my mission is to prove he wasn’t such a jerk. So far, it’s been an interesting discovery process; and yes, so far, he isn’t a jerk.

I have no idea what I will find, though, over the next several months of reading microfilm and digging around in dusty archives. Jerk? Maybe. Even so, it has been a pleasure to meet him. After I have completed the research, I also hope to introduce him to you in a completed biography. Stay tuned.