A conversation with Atticus Finch, Anthony Weiner, and Emmett Wilson

Today, we’ll put Atticus Finch, Anthony Weiner and Emmett Wilson into a room together, ask each man to name his key, defining moment in his career, then explain how that moment changed his life.

An odd group with nothing in common? Maybe not. Each was a lawmaker, each was considered a champion of the everyday man in his heyday, and each had a very significant ‘defining moment’ in his career.

For Atticus Finch, it was the defense of Tom Robinson against a claim of rape in Harper Lee’s To Kill a Mockingbird. Finch was assigned as Robinson’s public defender by a local judge; what was striking was Finch’s intention to do his very best for the client, in a community in the deep South when institutionalized racism was part of the culture. 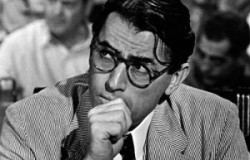 A literature professor of mine once asked, “Atticus Finch’s diligent defense of Robinson, which initially infuriated the community, ironically would earn their respect in the end. But was that really so ironic?”

Finch was a man with integrity, who lived integrity. Finch probably didn’t expect this case to be as critical in his career, when he first received it, but as he tells his daughter Scout in the book, when she asked why he was defending Robinson when everyone didn’t think he should, Finch said, “…every lawyer gets at least one case in his lifetime that affects him personally. This one’s mine.”

What happened after the case was significant. The community remembered Finch’s behavior and integrity; he had earned their respect even thought they were against his representing Robinson. Finch was reelected to the legislature, unanimously.

Emmett: “That’s all well and good, but you had no choice but to follow the judge’s order to defend this man. In my day, the case would probably not have made it to trial in my own community, given the mob rule about his alleged crime.”

Finch: “A mob did, in fact, storm the jail. They were going to serve up their own sense of justice. It took choice words to calm them, to send them home. Believe me, it was touch-and-go for awhile there.” 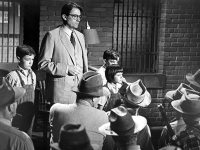 Mob at the jail. Source: Film at the Paramount.

Weiner: “Guns and drunks, all stirred up, storming the jail, I’ll bet. Of course these groups got out of control. And where was the law? Hiding in the woods?” (Snickers.)

Finch: “The point is, I could do no less for Robinson than for any other man who needed my help. Justice wears a blindfold, you know, but folks tend not to realize that.”

Emmett: “I never defended any man of color in my career. I don’t think I ever had the opportunity. Voluntarily, I probably would not have done it.”

Weiner (shouting, astounded): “Are you kidding me? A sworn officer of the court denying a man to be heard in court because of his color? What are you, some kind of racist wimp?”

Emmett: (shrugging, calmly) “Things were different in 1914. I’m not excusing it or myself; I’m just saying, there were black lawyers and white lawyers, and most of them represented clients of their own color.”

Finch: “But, if you had no choice, would you? And, would you have given it your best effort regardless of the color of his skin?”

Weiner: (scoffing, loudly) “You’d not have much of a law practice, my friend, if you hung onto the idea of a segregated practice.”

Emmett: “Maybe not. Do you have to shout all the time when you speak, or does everyone do that in 2014?”

What’s interesting about Anthony Weiner, is that like Wilson, Weiner was considered a long-shot in his first major election for the New York City Council in 1991, at 27, the youngest city Councilman in history.

Later, he ran for congress in 1998 for his mentor, Charles Schumer’s seat, and won. He was noted for his intense involvement in his constituency’s issues; this often was reflected in his intense communication style among his staff (which was reported as one of the highest staff turnover rates of any member of Congress in 2008). Weiner’s defining moment, unfortunately, was the sexting scandal that led to his resignation from Congress in 2011.

Arguably, this may not Weiner’s key defining moment, as a second scandal was reported in 2013 involving Weiner and sexting once again.

Emmett: “You know, my brother Cephas has a lot in common with you. In fact, I’d say he’s the Anthony Weiner of 1914.”

Weiner: (loudly, strong New York accent) “No way. NO FREAKING WAY. You didn’t have cell phone technology… (Weiner pauses, thoughtful for a moment)…but wait, if Cephas perhaps was to use a Brownie to take photos of himself in his long underwear to share with nubile young women in his district…hmm. Maybe. It’s possible….”

The Brownie: It was high-tech photo equipment for 1914.

Finch looks at Weiner over his glasses, somewhat disapproving.

Finch: “Do I understand correctly that you, a congressman, took photos of your, um, private areas and sent them to constituents?”

Emmett: (astounded). “Women have the vote?”

Weiner: (continuing) “Hey. Back to the subject. OK. Let’s say your brother wants to take underwear photos to send to the ladies. I don’t know if it’s feasible for him. You see, you all don’t have fast technology. The film would need to be sent out for development, because you don’t have the technology to move quickly. I see problems here. He’d have to wait, the film processor would see these photos, word would get out about it…it would take too much time, yada yada…”

Finch: “So, this is your defining moment?”

For Emmett Wilson, his defining moment was probably his election to Congress in 1912. He was considered a long shot by everyone, and it was by sheer dint of effort, of getting out, making speeches, meeting as many people as possible (while, at the same time, fulfilling responsibilities as State Attorney). Emmett’s victory over a seasoned, established congressman and lifelong politician surprised everyone, including himself, given the fact he was only 29 when elected, and with comparatively little political experience. 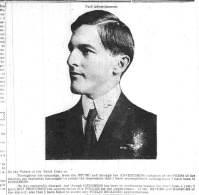 Emmett in a campaign ad.

Although many acknowledged Emmett’s intelligence and maturity, as well as his excellent service as District Attorney then State Attorney, the leap to national congressman was huge for someone only 29.

His constituents, while pleased with him, were concerned. The incredible pressures of Washington politics often destroyed other men who were older, more experienced, and who had a personal support system (i.e., a spouse or family) to help deal with the stress. Job stress was nothing new to Emmett, but it can be fair to say that Emmett underestimated the pressure that Washington politics would exert on him.

Emmett: “Months before I was sworn in, I was working on the transition to Washington. I was already feeling the pressure to ‘make good,’ and to keep up appearances that I could handle the job. It was the amount of unrelenting pressure, really, that overwhelmed me. And the thing was, I couldn’t really talk about that. It would seem as if I couldn’t handle it, and I had just won.”

Finch: “It wasn’t just about getting the job done, either.”

Emmett: “No. I had promised in my campaign that I would be better than my predecessor, that I would bring energy, youth, vigor to my work and that I would be productive. And of course, all of this is printed in the paper. You see that, you see the promises you made…it was overwhelming.”

Weiner: (loudly) “Reporters can be such a bunch of unrelenting sonsabitches. They watch you ALL THE TIME. Geez. Even back then, huh?

Emmett: “Back then, they didn’t report on everything, you know. The reporters had some decency, at least, that was my experience.”

Emmett: “I dealt with my pressure by drinking. I kept it covered up as much as I could, so that it didn’t look like it was such a problem, but the stress was truly hard to handle. Also, by 1914, the drinking had been a problem for several years. It was starting to impact my health with more frequency. So, that was the story we gave to the media about why I didn’t run for a third term, that my health was bad. My brothers and sisters said nothing about the drinking; they couldn’t. They were mortified about it anyway.  The thing was, I’m certain a lot of people knew it was about alcohol, but it never showed up in the paper.”

Emmett: (to Finch) “Did you ever drink?”

Finch: “Nope. It’s not that I wasn’t tempted, but the thing was, I would prosecute drunks in court. If I had a drink in town, everyone would know it. That was the way it was. It was about integrity, you see. I felt like I couldn’t have a separate code for both my private and public life.”

Weiner: “Yeah, but when you get addicted to booze, your integrity can go right out the window. Boom. You’re career’s done.”

Finch: “That’s it, exactly. And back in my day, a man losing his integrity was like a woman losing her virtue. Once it was gone, it was gone; woe be it if that information became public, which it often did.”

The men sit quietly for a moment.

Emmett: “My brother and the local party members, told the reporters one thing about my not running for a third term, but the truth was that I drank myself out of office. I’m fairly sure that some of the reporters knew the truth.”

Emmett: “It was downhill from there. I was gone in less than 18 months.”

Weiner: (normal voice) “Lots of people drink, Emmett. A drink can take the edge off, relieve the pressure. I get that.”

All three sit quietly for a few minutes.

Weiner: “I think I’ve had a new defining moment, gentlemen.”