In the past week, I’ve come across what I consider the turning point, the downward slide, in Emmett’s career and life.

It’s October, 1914. Up until this point, Emmett was the Golden Boy of West Florida, he was getting appropriations for his constituency, he was serving on important committees, he was making speeches in Congress. He was, for all practical purposes, making good.

Then, things changed quickly, almost overnight, and it is as if everything he touched or did turned sour.

Congressional appropriations for Pensacola ‘fell through’ without explanation; messages were either getting misdirected or not delivered at all, giving folks the impression that Emmett was not on the job. 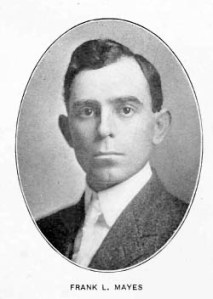 Also, Emmett appeared to have turned his back on one of his biggest supporters based on a unsubstantiated rumor, and locals were calling into question his official decisions, which looked incompetent and ill-informed.

As a result, Emmett’s chief supporter, Frank Mayes, the publisher of The Pensacola Journal,  completely turned his back on Emmett, essentially branding him persona non grata. Indeed, the editorial commentary in October was unrelenting in its scathing and dismissive comments about Emmett, where once there was nothing but support. When reading the papers in consecutive order, one gets a strong sense that Mayes feels ‘let down.’ The Pensacola Golden Boy image was gone.

I’ve seen it written that the opposite of love is not hate, but indifference; and in October 1914, Mayes was now entirely indifferent toward Emmett. Mayes was now looking to Tom West and John P. Stokes, Emmett’s primary opposition in the 1914 primary election, as Emmett’s potential replacements for 1916 — and Emmett still had the general election coming up in November (Emmett was unopposed in the 1914 general election)!

You see, back in 1912, Mayes basically took Emmett out of obscurity and made him a congressman; all Emmett had to do was prove his opponents wrong. Emmett’s opponents said he was too young, had no real legislative experience, had never run for any election at all, and (privately) that he seemed to have a drinking problem.

In the months leading up to Emmett’s candidacy, Mayes knew the challenges Emmett was facing, including the drinking. In 1912, there was a lampoon article in The Pensacola Journal teasing Emmett about the time he spent at his club; so, the fact that Emmett drank was not news to Mayes, or anyone else. Everyone drank. Emmett was likely good at hiding the amount of his alcohol consumption.

Mayes saw something in Emmett that made it worth taking a chance to back him politically. The facts that Emmett was young, and without significant experience in big-time politics were also known to Mayes. However, he believed that the only way to get experience was to actually do the work, and so, he backed Emmett. All Emmett had to do was promise to do his best, and I believe he did. Mayes promoted Emmett every chance he got in his newspaper, and it paid off — temporarily.

In the end, it came down to the fact that Emmett could not stay away from drinking, because this is what did him in. I don’t think Mayes realized what a problem Emmett had, either, and it took him for surprise too. And Mayes always felt like he had an accurate read on people, especially his friends. I think Emmett’s drinking problem caught him unawares; Mayes did not like to be shamed or proven wrong in public, especially after putting his reputation on the line with Emmett. Mayes had a great reputation for always backing the winners. This time with Emmett, however, he goofed.

Curiously, there was a chance for Emmett to turn all of this around, to take a stand, to make amends, but he didn’t. This is also noted in the contemporary media. The November 16, 1914 edition of the Lakeland Telegram read, “The papers are speaking out so plainly that the congressman ought in self defense to say something in reply.”

Many were curious why Emmett didn’t take a stand for himself. He worked very hard to get to Congress, and to convince his constituents he was up to the responsibility.

Also, Emmett felt the cut-off relationship with Mayes deeply. The two had been close up to October 1914. Emmett trusted Mayes; he relied on Mayes. Thing was, though, this was a political friendship based on patronage and favors, Emmett may have lost sight of that. Once he became useless to Mayes, that was the end of the relationship. Sad, but true.

I imagine Emmett’s friends were telling him to get help, immediately, and to say something, anything publicly to cover himself. He owed his constituency at least that much. I can imagine Frank Mayes’ (and his friend’s) frustration with him, too, when nothing was forthcoming.

Eventually, it came out that Emmett was drinking, every day, and it was out of control. As the drinking spun out of control, so did his life. Unfortunately, October, 1914, is just the start of that downward spin cycle.