In the Public Eye

Readers, one thing I’ve noticed in doing Emmett’s research is that back in the early 1900s, if your lifestyle or behavior was even the least little bit out of the ordinary, you can be sure that it would at least make it into the local newspapers.

For example, most people do not notice if a woman wears pants to the office, but it was not that long ago that ‘generally approved and accepted’ office attire for women was a dress or skirt-and-jacket.  Anything else was looked upon as out of the ordinary, or ‘unacceptable.’

True story: Not that many years ago, a female colleague of mine wore a suit to the office — a very nice suit that happened to be a jacket-and-pants ensemble — and I remember that colleague was told to go home and change because the pants part of the suit was ‘too distracting’.

Did you know that in the early 1900s, Pensacola had a law on the books where women could be arrested for wearing pants in public? This was considered cross-dressing, and it was illegal. I found at least three separate articles in The Pensacola Journal between 1910 and 1915 featuring these arrests!

Not only that, but these women could be sent to the asylum at Chattahoochee (today known as the Florida State Hospital) for such behavior. (An aside — no one thought attempting to walk in a hobble skirt was insane back then?)

Anything out of the ‘ordinary’ — and in my interpretation, that means any non-conservative, socially approved behavior — could result in negative attention — or worse — incarceration. For instance, women’s suffrage, a growing national issue by 1912, was reported as a negative issue in many communities (and marriages) at this point in history. One unfortunate aspect  at this point in history was that women could be (and often were) institutionalized in mental hospitals by their husbands, and this institutionalization often did not require a doctor’s order — a husband would only need a few ‘sworn statements’ by friends and neighbors, and he could have his wife put away.

This, in fact, happened to my great-grandmother. Briefly: She was interested in women’s suffrage; my great-grandfather told her to get interested in something less controversial; she said no; he had several friends provide sworn statements to a judge that she was ‘insane’ because she disobeyed him. Based on these sworn statements, he had her institutionalized, and she stayed in the asylum until her death.

My point is, regardless of whether you were a private citizen or in the public eye, one had to toe the behavior line. Emmett’s Pensacola in 1910 was a small, Southern town with conservative views of what passed for socially acceptable behavior. I’m sure no one was claiming to be perfect, or a candidate for sainthood, but locals whose names were printed in the news, and certainly, those whose names appeared on the Society page, had high standards to uphold and maintain. Any slips meant social suicide. Emmett and his friends had to toe that behavior line carefully.

Yesterday, I found an interesting list of reasons for admission to the Trans-Allegheny Lunatic Asylum. What’s interesting is that I believe most of these issues are behaviors that were fairly common in the early 20th century, and yet, check out what might have gotten you a first-class ticket to a mental institution: 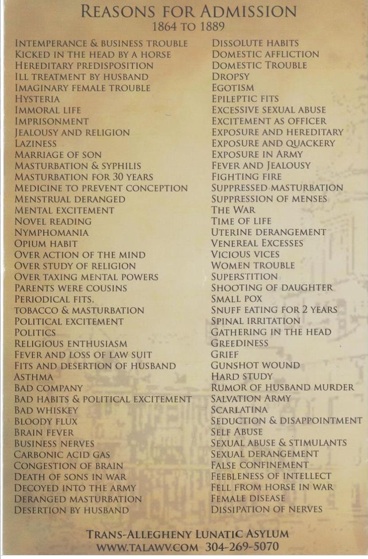 Novel reading? Salvation Army? How many of us would be left on the outside if this list was still widely used by other asylums? Or would that be asyli? Source: Pinterest.

I can rule out several things on this list that did not apply to Emmett: Emmett was never kicked in the head by a horse. His parents weren’t cousins. He was neither a member of the Salvation Army, nor did he aspire to stand next to a kettle and ring a bell. Also, anything to do with menstruation can probably be eliminated.

I haven’t yet found proof that he ate snuff for two years; I can’t yet comment on whether he was a ‘hard study’ or not. Emmett certainly would have experienced business nerves, and political excitement (after all, he was a U.S. Congressman), but I don’t know if his particular combination would have qualified him for a stint at Chattahoochie, for that matter.

I do know he had several friends and a brother who arguably were some of the biggest egotists of the day. Also, he had a friend who was, indeed, kicked in the head by a horse. None of these people were institutionalized; I’m not sure if that was a good or bad thing.