Today’s post isn’t an homage to one of my all-time favorite movies; rather, it is an interesting side story that I might try to work on once I finish Emmett’s biography.

While reading through an archive of Emmett’s student newspaper, I found information that indicates Emmett and his fellow graduating law students had a group portrait made. I didn’t know this existed!

Magnolia Studios was run by Miss Minnie E. Neal — a woman-run business in what was then a cutting-edge profession. Her partner was Marian A. Freeman. Source: Stetson University Archives

I have a class photo of him (one that was replicated in the newspapers, so it is grainy at best), but I would love to see him with the entire graduating law class of Stetson University. There were only eight students in the class, so Emmett would be easily identifiable (compared to a graduating class with 50 or 60 in the photo).

I contacted the Stetson archivist on this, but they don’t have any record of class portraits for this group. There also wasn’t a yearbook for 1904 (Stetson’s first yearbook was published in 1908), so, I can’t check that for the group photo.

All I had been able to turn up about Magnolia Studios were a few advertisements in the Stetson Weekly Collegiate (the student-run newspaper).

So, I next contacted the local historical society in Deland for any records of this business. They weren’t familiar with it; also, there wasn’t a city directory for Deland in 1904.

Next, I turned to the U.S. Census, and that’s where I lucked out. I found out that Minnie had moved on to Jacksonville — it is unclear when she did — and became president of the WCTU for Florida. 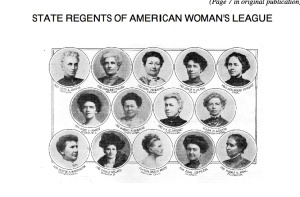 Minnie Neal, bottom row, last photo on the right. She was a State Regent for the American Woman’s League. I had a feeling Minnie was a woman ahead of her time. Source: history.ucpl.lib.mo.us/

Not only were Minnie and her business partner Marian Freeman also still working as professional photographers, but they were also sharing a home. Interesting: Two women in a cutting-edge profession, on their own, doing just fine. “Acceptable” women’s jobs were mostly limited to teaching, nursing, and secretarial work in the early 1900s, so discovering these two with a successful photography business was a pleasant surprise.

My curiosity piqued, I dug a little further: In the 1935 Florida State Census, Minnie is 65 and she’s again listed as state president of the WCTU. Marian is 61, and working as an editor.

In the 1940 census, Minnie and Marian are still sharing a house. Her relationship to the head of the house (Marian) is listed as ‘partner.’  In the other census documents, there’s no relationship stated between Minnie and Marian. Back in 1940, that is probably all Minnie could say about their relationship. By this point, they had been together for at least 30 years.

I would love to know what happened to their photographic collection, and if perhaps I can find another photo of Emmett in that collection.

Also, I’d love to know what happened to Minnie and Marian. The more I think about these two, the more respect I have for the women trailblazers from the gilded age.

Now that I know they moved to Jacksonville, I’ll follow up with the historic society there, after the holidays, for more information. I’ll keep you posted.