On Valentine’s Day, I found an interesting article in the 1894 edition of The Chipley Banner, Emmett’s hometown paper. (He was 12 years old at the time; I don’t think this would have caught his eye.) 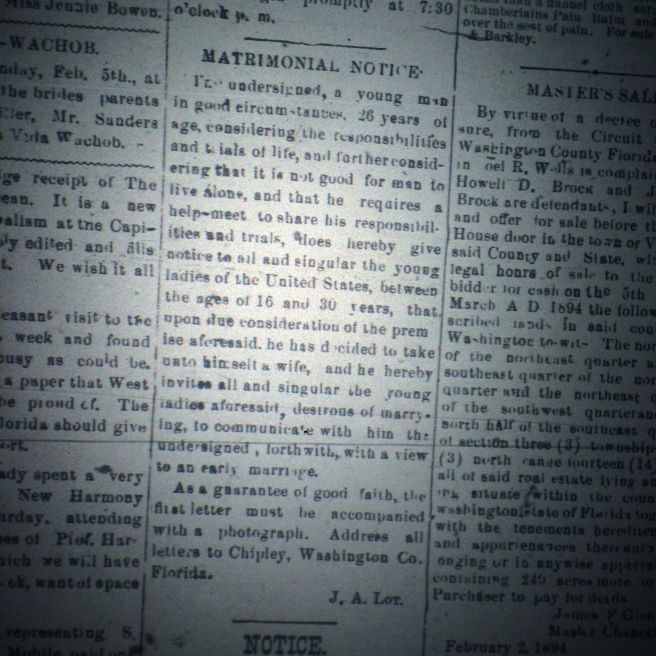 Mr. J.A. Lot gives ‘notice’ to ‘all and singular’ young ladies of the United States that he is ready to settle down! Whoa!

Did Mr. Suave and Sophisticated get a ‘Lot’ of responses to this ‘romantic’ proposal? Did he expect to win the ‘Lot(tery)’ equivalent of single women storming his farm, beating on the door, pleading with him to marry them?

I’m pretty sure that ‘storm of single women’ didn’t really happen. We’d have read about it in the Banner if it had.

I shared this with friends who belong to a Washington County, Florida genealogy group. After they stopped laughing at it, one of the researchers said she thought knew the descendants of the person who placed the notice, but she couldn’t be certain, because the J.A. Lot she knew spelled his name a bit differently (Lott). But, the gentleman she had in mind married someone in Washington County in 1894, so it was possible that J.A. met the help-meet of his dreams via an advertisement in The Chipley Banner.

I wonder, if he married one of the respondents, if the lady was his first, second, or 15th choice? I wonder how many responses he received anyway: It was not inexpensive to have a photograph made back then, especially to send to a complete stranger.

I suppose if the matrimonial pickings were pretty slim in rural Florida, this might be a good way to meet your mate. J.A. must have felt that he had no other choice but to look outside his community, so I wonder why he chose The Chipley Banner (and not another paper, such as The Pensacola Journal), which had a larger circulation, and there was less of a chance that the reader actually knew J.A. Lot(t), and perhaps would be willing to cast her lot (pun intended) with this fellow.

At least J.A. Lot was forthcoming and honest about what he was looking for: An unsalaried farm hand with benefits.

Tagged as: The Chipley Banner