I often wonder about the relationship Emmett had with his mother: Was it formal or relaxed? Was it “Mother” or “Mom?”

At this point, even after two years of research into Emmett’s life, I still don’t know much about Emmett’s mother, Elizabeth Virginia Maxwell Wilson. I’m still looking for family records, church records, or anything else about her. I’d love to find a photograph of her.

The inscription at the base of Elizabeth’s tombstone.

But, I get a strong impression that Emmett and his mother were close; that perhaps, he was the apple of her eye.

I have a photo of Emmett as a child. In that photo, he is standing left of his youngest brother, Walker. Emmett’s twin, Julian is on the other side of Walker. On the reverse of the photo is a message, written in Elizabeth’s hand. The photo was taken in December, 1890, and several copies of the photo were made for keepsakes (I’ve seen more than one copy of this particular photo; Emmett’s niece Jule has two actual copies from 1890). The message reads: “Happy New Year. A New Year Card for Grandma from Emmett, Julian, Walker. 1891.”

Emmett in a fancy bow tie, courtesy of Elizabeth Wilson.

The boys are dressed up; hair carefully combed. Emmett has a really fancy bow necktie. It is big and flouncy. I’m sure Emmett didn’t tie that bow himself; I can see Elizabeth carefully adjusting Emmett’s tie under the stiff collar he had to endure, tying a neat bow, and adjusting it just so under his chin. The loving touch of Emmett’s mother.

Call it a stretch, but in just looking at Emmett’s fancy bow tie, put into place just so by his mother, I sense that Emmett and Elizabeth had a close relationship. Even though it wasn’t a stiff, formal relationship, I don’t really see him calling her “Mom.” It seems more likely he called her “Mother.”

I wish I knew more about Elizabeth. 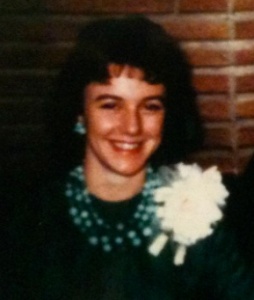 I called my mother “Mom.” We had a complicated relationship; we were not close. I wish we had been closer; but to be honest, we had completely different temperaments.

Mom was a fine lady; she was a good person and a generous, compassionate friend. I did love my mom; I know she loved me. But we did not like each other. I remember trying often to forge a closer relationship to my mom, but it felt phony and forced.

I often wished our relationship was otherwise, but sometimes, even in close family relationships, the chemistry just isn’t there, and no one can help it. I didn’t find this out until a few years in sobriety; I wish I had known it sooner. I think I would not have psychologically beat myself up so much over the lack of relationship with my mom.

Once, after my mom had been drinking a lot, she called me and tried to discuss the odd relationship she and I had. But she was so blurry and incoherent on the phone, I told her that I’d talk to her later after she sobered up, and hung up on her. Mom then called my sister, who lives on the opposite side of the country, and complained how I once again sabotaged her attempts to build a relationship with me.

My mom and I had different interests: She was an artist. I hated art. I loved to write. She hated writing.

My mother was a lot closer to my sister, who is a professional artist. They always seemed to have a lot more to talk about. They always seemed to ‘get’ each other, and I grew up feeling a tad like an outsider in my own family. I always used to suppose it was because I was an air sign (Aquarius) and they were earth signs (Taurus and Virgo). Air + Earth = Tornadoes.

The interesting dynamic in my family was that my mom and her mom (my grandmother) were also not close at all — but Mamaw (that’s what I called her) and I were really close. Mamaw and I were also both Aquariuses (our birthdays only 55 years and six days apart). 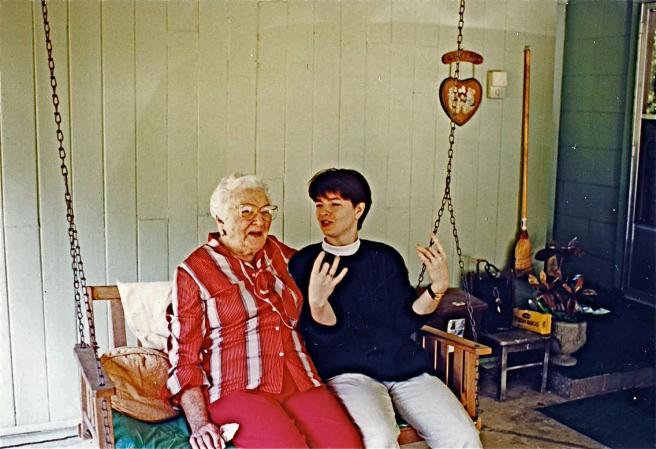 Me with my grandmother about 15 years ago. I was telling her this really dirty joke (she enjoyed a good dirty joke), and she was laughing so hard the swing started to crack. She died not long after this photo was taken. I miss her terribly.

I could talk to Mamaw about anything, and she’d never judge me. She’d just listen. We knew how to talk to each other, and even we were decades apart in age, we really connected well. I loved and respected Mamaw; I was also a little afraid of her, because she would say it like it was, whether I wanted to hear it or not.

Once, she said to me, “I know you and your mom aren’t getting along too well. Sometimes, even in families, people don’t connect well. Try to accept it for what it is; don’t beat yourself up over what you can’t help.”

I said to her that I thought mom and me just didn’t connect well, and I was tired of trying. And Mamaw said, “Well, one day you’re going to be a parent. You might have a similar situation with your daughter. Just remember what this was like with your mother; take what you can from it.”

My grandmother was a smart lady. She was the first female IRS auditor in the Jackson, Mississippi office, and she eventually was in charge of that office; she retired in 1965.

She was tough, too. My grandfather (her husband) was a big-time alcoholic. Mamaw loved him, but she would not tolerate his bad behavior, and threw him out more than once. Interestingly, Mamaw was the only adult in my immediate family (parents, both sets of grandparents) who did not drink AT ALL. I wonder how she put up with all of us as she did.

Eventually, my grandfather stopped drinking on his own, sans AA. I don’t know how he did it on his own without the program; living with Mamaw probably had something to do with it. She inspired strong character.

My grandparents were married almost 60 years. “Tough love,” she used to call it. “The reality of being married is that it is not all a bed of roses,” she said. “Don’t forget that.”

It is Mother’s Day weekend, and my mom has been gone almost six years. I didn’t think I’d miss her, because of the lack of closeness all these years, but I do.

With the passage of time, I certainly understand my mom a lot better:

She worked full time and my dad worked full time, but he was mostly away in another town, always working on some big construction contract. He traveled a lot in those days for his job, so, mom was single-parenting my sister and me for months at a time. She would come home, exhausted from her job (which was at a law firm and highly stressful), and just want to relax and have a drink. That’s mostly what she did after work for years. Both my parents were high-functioning alcoholics; that’s how they dealt with stress.

That was how their parents dealt with stress. It was just a ‘tradition,’ handed down, so to speak. Of course, I did not see this while I was growing up. At the time, I only saw that my mom and I didn’t ‘get’ each other, and after 7 pm (when my parents were already deep in their cups), a normal conversation with them was impossible. They’d be out of it already.

If my mom didn’t drink at all, it might not have made any big difference in our compatibility. But I think, perhaps, if booze was out of the equation, at least we could have discussed our dysfunctional relationship with clarity, perhaps reaching some understanding and better appreciation of the differences between us.

Two weeks before my mom died of cancer in 2009, I wrote my mom a long, heartfelt letter, expressing my sadness that we were not as close as I’d had hoped over the years, and asking her forgiveness and understanding for my part in making our relationship less than what she’d have hoped for.

I had to write that to her; I was nine months pregnant and unable to travel to her bedside. Also, at that point, cancer had spread to her vocal cords and she was unable to speak. My sister told me she did get the letter, and she read it.

I don’t know what my mom’s reaction was to it. She shooed everyone out of the room while she read it.

I get the feeling that things were made better between us at that moment.