I Hope I’m Wrong About Kathleen

The quest for the Wilson family Bible continues. 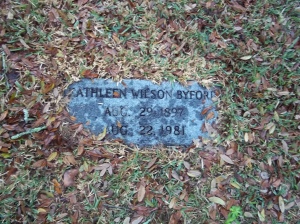 The lengthy list of last names gives me a clue that Kathleen had a rough time finding herself, finding happiness and stability in her life.

I believe this may be a reason why Lula would not have passed the Wilson family Bible on to Kathleen. That, plus the fact that Lula did not pass her engagement/wedding rings to her own daughter, but to a niece, according to a note in Katie Wilson Meade’s documents, to ensure ‘the ring stayed in the Wilson family.’

Kathleen, God bless her, seemed to have been a troubled soul. I hope that isn’t true. The reality, though was that it was not easy being the daughter of a man who was on the road a lot, who was busy building an important career while taking care of a family all at the same time. With people as driven as Cephas, family often did not come first on a daily basis. Work came first.

(I’m not passing judgment here, by the way; just stating the reality. For many people then, as now, work can get in the way of life.)

Cephas was a talented, intelligent, civic-minded man, who had a lot of irons in the fire:

Cephas and Lula Wilson were good people; kind people. They looked after family; they took in brothers and sisters whenever someone needed a home. But neither was perfect, and that’s a hard thing for kids to understand, when you still look up to your parents (who are important people in the community), and you think that they are all-powerful.

Cephas made mistakes. He didn’t win every single case he took on, and for all that he had a ginormous ego, I don’t ever think he went about claiming to be perfect. But, the straw that broke the camel’s back in this family was when he cheated on Kathleen’s mother, Lula Wiselogel Wilson, and it was lampooned in the Florida press.

Lula saw it, and it was humiliating.

Kathleen was old enough to see and know what this meant, too.

Whatever else went on with Cephas and Lula was bad enough that Lula filed for divorce in the 19-teens, which a lady of her social standing in Marianna back then just did not do. Filing for divorce meant airing your family’s dirty linen. You keep it quiet. Lula’s taking a stand for herself turned out to be a very big deal in both Chipley and Marianna. To quote Berta Daniel Wilson, as interviewed in one of the Wilson family genealogies, “…the gossip (about Lula filing for divorce) was terrible at the time.”

Kathleen had to have witnessed the fighting and inconsistent, unhappy behavior at home. She probably questioned her own security. What happens if Mom and Dad divorce? What will happen to me? Can I get away from this?

Lula eventually dropped her divorce suit against Cephas probably because the family asked her to reconsider: A divorce would reflect negatively on the entire family. Did she want everyone else to be hurt as well? I think this was a tough decision, but Lula decided to put other concerns ahead of her own happiness.

I believe that seeing the unhappy existence between her parents at home spurred her to do something dramatic, to escape their authority. And what does a youngster do to escape a bad situation at home in 1914?

In 1914, if you were a boy, you might run away to join the circus. Or, get a job with the railroad, to be dispatched elsewhere. A girl’s options were more limited: You put up with it the situation at home until you were of legal age to move out, or go to college (which Cephas certainly could have afforded), or, you got married.

And so, at age 15, Kathleen got married to Ira H. Martin, a genial young man about 21, who worked at the Post Office. Ira now became her authority figure; Kathleen had her own family, and best, Ira wasn’t like her Daddy. At all.

But, Daddy still figured in the relationship significantly: As a consequence of being married so young, and without much money, the Martins moved in with the Wilsons right after the marriage. Imagine that: Kathleen wanting to be out from under the parent’s cloud of craziness, only to move in with them as a married woman. Oy.

Well, Cephas was on the road more often than not, and Ira was different: He was a stay-home kind of guy, decent. And brave, too: He volunteered with the local fire department (which he did with distinction for decades). 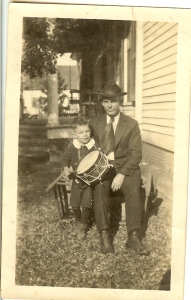 Kathleen probably discovered soon after she was married that her change of status in Marianna didn’t solve any of the problems she was wrestling with at home, and with herself, whatever they were. She was lucky to have Ira, though; he was a kind man, and later, a doting parent.

And then, also according to family sources, Kathleen was somewhat unstable, and so, a few years after Cephas Martin was born, she took off, leaving Ira to raise the boys on his own.

By 1930, Kathleen and Ira were divorced; both were remarried that same year. Ira and his second wife raised the Martin boys; and he lived most of his life in Jackson County. He died in 1951.

I don’t know if Kathleen ever had any other children, or, if she eventually found happiness. I hope she did. I just have the idea that she was constantly seeking fulfillment and happiness everywhere, and never really finding it.

Her story also reminds me strongly of Emmett: How he, too, sought fulfillment and happiness via external sources, and he never found it.

I hope I’m wrong in my estimation about Kathleen.