One of the hardest lessons in life — and, about sobering up — is that we have to revisit the lessons often, remain teachable all our lives, in order for the learning to sink in.

Rarely is life, or sobriety, a one-shot deal, like getting a polio vaccine.

I wish that life and sobriety were like that, but I’m stubborn.  I’m the kind of life-student who needs constant reminding. I try to stay teachable, which is not easy.

The most important lesson I’ve learned in almost nine years of sobriety is this:

No one else can do the work for you.

You do it yourself, for yourself; else, you won’t stay sober. You can’t do it for your husband, or your mother, or your boss. 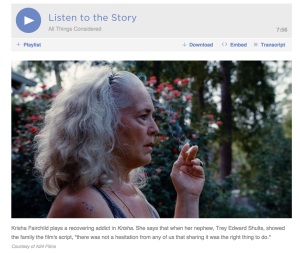 “We didn’t get that we couldn’t save them.” Source: NPR

I was listening to an interview Tuesday on NPR about a movie called “Krisha.” It is about a woman — an addict in recovery — coming back to her family after being away for years. The actors in the movie have family members who are alcoholics and drug addicts, and a comment from one of the actors resonated with me deeply. She said:

The piece resonated with me because it reminds me so much of Emmett and his family’s attempts to get him to sober up.

Emmett would dry out, swear off; but, it wasn’t enough. Whatever sobriety he achieved was only short-lived, because he didn’t do it for himself.

I posit that this was the central issue with Emmett, personally and professionally. Everything he had was, pretty much, done for him. Emmett had tremendous professional opportunities gift-wrapped and handed to him.

Emmett never had to sit in line in an employment agency, nervously fiddling with his stiff three-inch collar, anxiously trying think about what amazing thing he could say to the HR exec of 1907 that would land him a much-needed job. Nope.

I don’t think Emmett ever really knew what it was like not to know where the next meal was coming from, or, if he was going to have to pay the rent this week instead of the heating bill, and hope the creditors would cut him a little slack until he had a bit more ahead. There’s nothing like having experienced the wolf at the door scenario at least once in your life — you learn that you can and will survive, no matter what.

I’ve been watching two American Eagles — named Mr. President and The First Lady — as their eaglets hatch this week. You can watch the action in the nest too, here.

The mother and father eagle never help the eaglet break free of the shell — that’s the first lesson of survival.

For a long time, I often wondered why Emmett didn’t just save himself, you know. He was a smart man. He was logical. He was certainly informed about his situation: His own father AND brother were physicians who weighed in on his health status, advice free of charge.

Also, there were at least two interventions by family and friends who were trying to help him.

Emmett was told, “Do something. Save yourself.”

Well, that was the problem. How can someone save themselves if they’ve never been shown how, or, given the chance?