While Meade wasn’t exactly a mentor in Emmett’s life — that title was reserved for Cephas Love Wilson — he was certainly a positive, solid influence on Emmett. Meade did help Emmett get his first real job with the L&N Railroad in Chipley; he probably told him what to expect: A solid career, gainful employment, long (but regular) hours, a chance to travel.

The noticeable thing about the Wilson siblings is that they may not be always physically close (they lived spread out across the West Florida panhandle), but, they could rely on one another when things got tough.

For example, when the twins Emmett and Julian did start to work for the railroad, they were about 14 or 15 years old — they should have been in high school. But, the economy was quite bad. Unemployment per 100 persons was between 12.5 and 15 percent; you can be certain that it was hard for the Wilsons (whose family still numbered about 10 living at home) to make ends meet. Everyone had to do their share, which meant that if you were old enough to work, you got a job as soon as you could.

I mentioned this issue in context of the Meade Wilson’s story because I thought this was most compelling:

The death certificate informant was none other than Meade’s older brother Cephas Love Wilson, not Meade’s wife Carrie (although Carrie was there). I found a reference in one of the 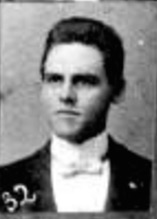 newspaper clips that Cephas was summoned by Carrie to North Carolina two days before Meade died — and Cephas, busy lawyer/banker/judge that he was, dropped everything and went to Meade.

This is yet another example of the tightness of the Wilson family circle: When times were tough, the Wilson siblings could rely on one another —

— Except in Emmett’s case. But that’s a story for another post.