How was your New Year’s celebration?

Ours was low-key — a family party with several friends who also have small children. Nothing outrageous, nothing fancy. Mostly, pot luck, with too many carbs, and a gathering around the large-screen television to alternately curse and bless the teams playing in the Fiesta Bowl.

Here’s a look at what Emmett likely enjoyed 100 years ago today, courtesy of The Pensacola Journal: 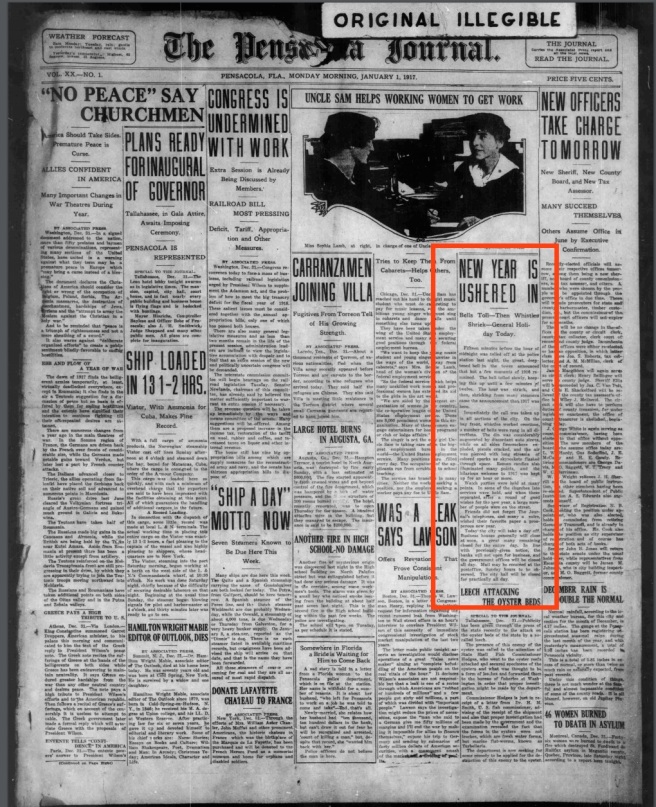 Emmett was in Pensacola for New Year’s Day, January 1, 1917. He would have seen and/or heard at least some of the celebration. Source: Chronicling America.gov 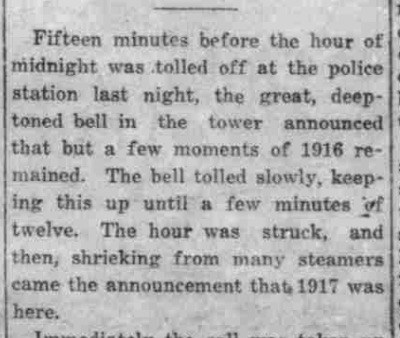 The Pensacola police station had a bell tower?

I’ll have to ask my intrepid colleague Jacki Wilson, archivist of the Pensacola Historical Society about this one. Of course, it makes sense that the police department would have some kind of public alarm system in a city.  The Pensacola Police Department has been in existence since 1821. The station at North Hayne & Jackson is a modern building; I wonder what became of the tower?

The original police department was located at the corner of Jefferson and Main, according to the 1916 Pensacola City Directory:

Office at the corner of Jefferson & Main. Source: Ancestry.com

And then, there were only a handful of police department signal boxes located around the city:

The numbering is a bit odd — perhaps it was because telephones were becoming more commonplace in homes and offices? Source: Ancestry.com

Here is the corner of Jefferson & Main today:

And this is what is across the street from the old police department — no bell tower in sight. Source: Google Maps.

And, here’s the overhead shot:

Definitely no bell tower. At the top of the image, above where it says “E Zarragossa St”, is the T.T. Wentworth Museum, also known as the old City Hall. Source: Google Maps.

I’ll have to wait until later this week to touch base with Jacki about the Police Department tower.

Here’s the rest of that article:

Auto sirens? Other than official emergency vehicles? Discharging firearms in the air? I’ll be the Pensacola P.D. was busy, even though the article says the city took the day off. Source: Chronicling America.gov

I can imagine Emmett attending a watch party or two, held at one of his friend’s houses in the North Hill neighborhood (where he lived, on and off, with the Walter Kehoe family for most of his life).

I wonder if Emmett was thinking about his future with apprehension? Melancholy? Relief?

Emmett’s last day in Washington, D.C. as the youngest U.S. Congressman would be on March 3. His best friend, Walter Kehoe had won the election to succeed him.

Emmett bore Walter no ill will, nor was he bitter toward his friend — but it must have been strange, living in the same house as his successor, much being made of Walter’s rise in Florida politics, while Emmett was leaving office under a cloud of disgrace.

Oh, to find some letter, or photo, or scrapbook entry about Emmett’s last few years! Maybe that will come to pass in 2017!