One-Shot at a Free Ride

I’ve been thinking about the vocational/educational breakdown of Emmett’s immediate family:

Emmett’s education was a bit unusual because he was the only Wilson child with two chances to go to college — he either failed out or dropped out of West Florida Seminary (now Florida State University) in 1900, and two years later, enrolled at Stetson University, graduating in 1904.

Frankly, this surprises me, given that

It seems like the family helped Emmett pay for the first college (West Florida Seminary) tuition, but the second time, I believe Emmett was on his own financially. It just doesn’t make sense to me that the family would put up two college tuitions for one child, and not do the same for the other younger children. Emmett had one shot at a ‘free’ tuition ride — and when it didn’t work out for him at WFS, he knew he’d have to pay his own way if he ever wanted to go to college again.

Ad from The Chipley Banner, 1894. DJ Jones was a well-established attorney and judge for many years. Source: Chronicling America.com

After Emmett came home from WFS in January, 1901, he immediate started clerking for Judge Daniel J. Jones, one of the most important lawyers in West Florida, with the idea that he would do as his brother Cephas: Clerk for a prominent jurist for a few years, take the bar exam, and begin his practice.  But times were changing for the legal profession around 1900, as more states were requiring law school and official degrees as proper credentials over old-school apprenticeship training.

Emmett and Judge Jones must have discussed the future of the profession, and I am certain Judge Jones would have encouraged Emmett earn a law degree at a college or university, to ensure his best possible professional opportunities. 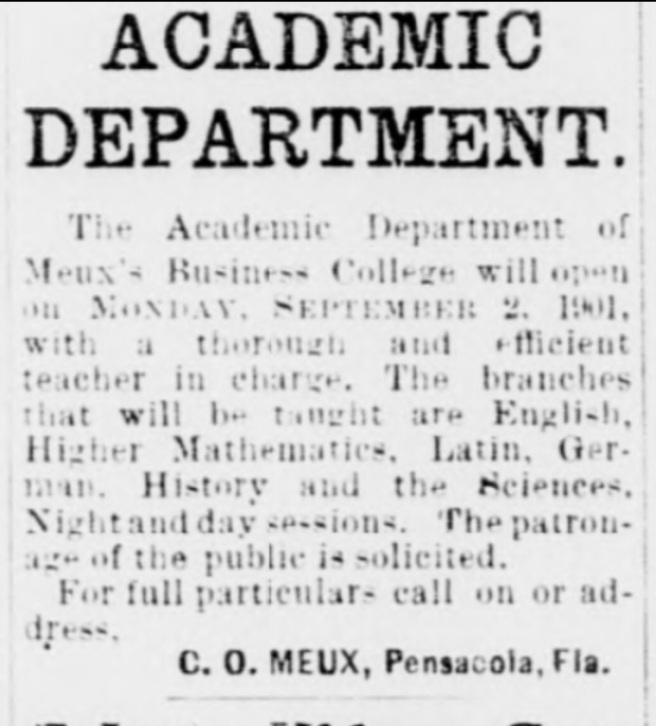 Advertisement from August 30, 1901 edition of The (Pensacola) Daily News. Emmett had been clerking for Judge D.J. Jones, during this time — but he could only do so much without knowledge of shorthand. It is likely Jones recommended Emmett obtain shorthand training. Emmett was visiting family during the summer of 1901, and this advertisement got his attention. Source: The (Pensacola) Daily News, August 30, 1901.

Emmett remained with Jones as a clerk for about six months, before he left to take a shorthand course at Meux’s Business School in Pensacola, returning in 1902 to clerk for Cephas in Marianna for several months, earning enough money to attend Stetson University in September, 1902.