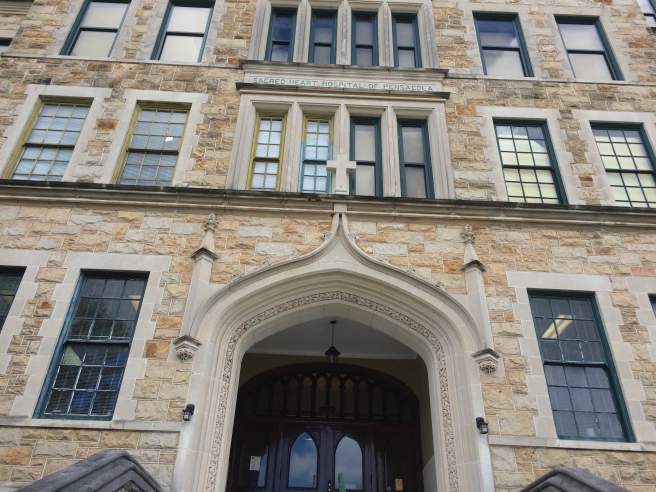 Piled high with boxes, the floor thick with dust and recently scraped paint chips, this room, like much of the building, is a work-in-progress. Aaron Ritz, one of the owners, has been hard at work all morning; he’s determined to bring his patient, Pensacola’s landmark 1915 Gothic Revival hospital built by the Daughters of Charity, back to life.

I’m here to find the room where my ancestor, Emmett Wilson, was a patient in 1918. I have Emmett’s admission records, but I dread finding his room, because it absolutely confirms my research.

Aaron bends over in paint-splattered coveralls to open a drawer in a low cabinet; he gingerly sifts the brittle original blueprints — water and rust have not damaged the clarity of the drawings. He pauses, peers closely at one page — “Here,” he says, with satisfaction. “There’s two patient rooms on the basement level, next to the electric therapy room.”  He notes that these patient rooms had a separate vestibule, which was unusual. 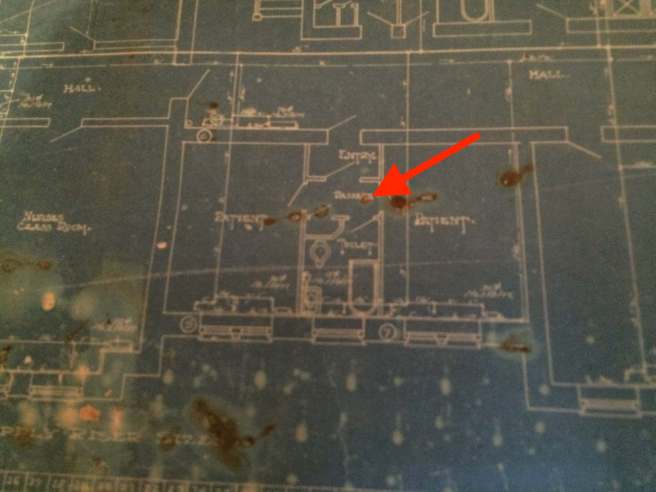 The vestibule in between the patient rooms in the alcoholic ward.

“It was for security purposes, as some patients would likely have been restrained,” I said.

After reviewing the blueprints, Aarons escorts me downstairs. The original terrazzo floors echo our footsteps as Aaron points out faded Tudor arches, and radiant tiger oak window frames. To lighten the mood, I ask if he thought the arches were to accommodate the Sister’s tall, winged cornettes, which were often as wide as the Sister’s shoulders.

As we reach the basement, Aaron points out the rooms from the blueprint. I thank him; he heads upstairs back to work, leaving me to explore.

The basement’s cool calmness quells my anxiety — it was probably a good place for patients like Emmett, who were desperately seeking peace and tranquility from their demons. It isn’t lost on me that patients in this ward — the alcoholic ward — were sequestered from the rest of the hospital on purpose. The quarantine is poignant: I know that Emmett’s final months were also spent in isolation, as his family and friends had given up on him, unable to convince Emmett to heal himself, to achieve sobriety.

Emmett’s room was down this hallway.

But Emmett knew he was dying of alcoholism almost a year to the date of his death. I saw it in the words of his last will and testament: A terse, pathetic document that dispensed with his worldly goods in less than two pages. He didn’t have much in his life; he didn’t have much at the end. Not even family, really. He was brought unconscious to Pensacola Hospital by strangers on May 25, 1918.

Hesitantly, apprehensively, I touch the door of what was Emmett’s room. I close my eyes, and try to image what he was feeling, or thinking.

When Emmett came to, God only knows what he thought, as he was in the throes of delirium tremens: Irrational, raving, and likely strapped down to his iron bed. He was probably shocked to see a dove-like cornette hovering over him, as the Sister-nurse ministered to him.

Was it possible that in the throes of his delirium, Emmett, like King David, prayed for the wings of a dove, so that he could fly away and be at rest? Did he know that the end was near, and that the Sisters were there to ease his passing?

Perhaps, as he closed his eyes for the final time, Emmett realized his prayers were answered.