Sometimes I catch myself wondering what the hell I’ve been doing with Emmett, who has taken over my research life for the past six years. I did not go looking for Emmett; rather, years ago before Emmett, I’d started out writing about someone else, Rosa LeBarte Countryman, my great-grandmother.

When I ‘met’ Emmett, I set Rosa’s story aside, because, well, I’ve known about Rosa all my life. She’d always be there, I thought — but Emmett was something else. I felt anxious to catch up with his story, because he’d been gone almost 100 years, and only God knows the location of any of his primary documents. I felt anxious — panicked, actually — to find what I could from any possible source as fast as possible. 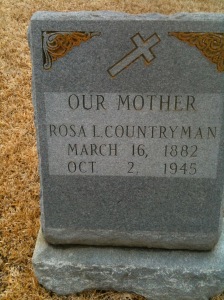 Rosa, in Vicksburg’s Cedar Hill Cemetery. She is not buried next to Richard Sr.; she’s interred with her sister’s family.

Six years later, I haven’t completely forgotten Rosa — I will pick up her story again — but sometimes guilt creeps over me about this, because Rosa was my introduction to Emmett. Also, I’ve learned that Rosa was often ‘set aside,’ taken for granted most of her life by other people, particularly those who claimed to love her best.

I’m not giving up on Rosa’s story; but I feel a compulsion to assemble this Emmett puzzle I’ve discovered. Weirdly, these were two completely separate individuals, people unknown to each other as far as I can tell, but connected in some way. One lead to the other, mysteriously, unexpected.

Rosa connected me to Emmett, which makes her a part of Emmett’s story too. It’s only fair to include her in the Emmett story — and so, perhaps, I’m not setting her aside after all.

Primary documents in research are critical — in the case of Emmett and Rosa, primary documents consist of diaries, letters, scrapbooks, date books, personal photographs, and so forth.

I knew going into Emmett’s research that finding any of his primary documents was going to be a challenge anyway, because I haven’t been looking for him, nor did I know anything about him other than what was in contemporary media.

But with Rosa, my great-grandmother, I knew about her already, anecdotally. Rosa’s stories were always around, but mostly avoided, and spoken about in whispers and quiet asides among family members.  Once, I asked my grandmother about her — I was 10 years old, doing a school project on family heritage. My grandmother gently put me off when I asked about Rosa, then firmly when I didn’t get the hint to leave the topic alone. As with the other adults in my family, I grew to know to avoid that topic with her, but I bugged everyone else who may have known her in my childish persistence.

My dad wasn’t reluctant to talk about Rosa; he remembers her presence, but not much else.

“I was a little boy when I met her at the East Mississippi State Hospital in Meridian back in the 1940s; about five or six or so. The thing I remember the most about that place was the train ride from Vicksburg to Meridian Mississippi, and that it was a family pass because my Uncle Richard worked for the railroad. That, and the fact that my Mother was always depressed for days afterwards,” he said. 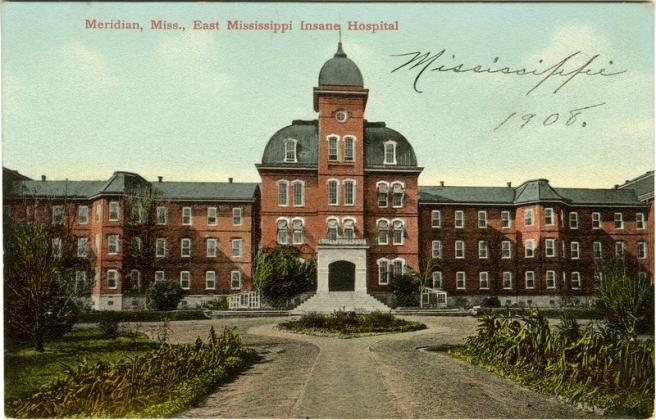 From Meridian, Miss., East Mississippi Insane Hospital. Sysid 92221. Scanned as tiff in 2008/08/18 by MDAH. Credit: Courtesy of the Mississippi Department of Archives and History

My 92-year-aunt remembers her, though, and has personal photographs, perhaps Rosa’s correspondence. But she refuses to talk about it, or to let on where the letters are, to this day. Her eyes, once clear and sharp, are loving, but faded and weak — but when I mention my continuing quest to learn the facts about what happened to Rosa (with the intention of doing right by her for once and for all), sadness comes over her face about Rosa, even 80 years later.

I know Rosa’s letters existed while my mother was alive — Mom used to talk about the beautifully written letters Rosa wrote to her sisters, my great aunts; beautiful in both medium and message. Rosa’s graceful penmanship was taught to her by the Sisters of Notre Dame — and — they were in French. Precious relics, indeed. I wish I knew if they still exist. 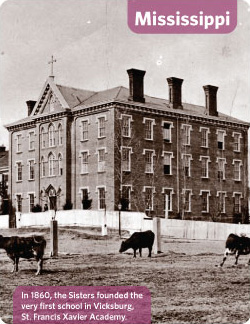 Alas, no one in my immediate family speaks or reads French.

Mom said that my grandmother told her Rosa wrote them in French because she didn’t trust her husband, and she likely had her reasons, because it was my great-grandfather who put Rosa in the East Mississippi State Hospital. “Had her committed,” my Mom said.

I don’t know anything about their marital situation, nor when the discord may have started — but I know that their relationship wasn’t always bitter. Mom mentioned it was somewhat exciting and ‘forbidden’ from the get-go, as my great-grandfather, Richard Sr.,  was not Catholic, but an itinerant Baptist preacher with New York state roots and a freelance electrician who wired the convent at St. Francis Xavier Academy, where Rosa attended school in Vicksburg.

Mom said that’s where Richard Sr. met Rosa; where he convinced her to marry him, likely without express approval of Rosa’s parents.

I remember Mom telling me: “Rosa was smart. She was bilingual, well read, but she was also a woman of her time, meaning there wasn’t much for her except a pink collar profession, like teaching, or nursing, unless a woman married. And at that point, a married woman wasn’t expected to work.” Mom added that Rosa was crazy about my great grandfather, apparently for the first part of their marriage. A woman doesn’t just marry someone outside of a tight-knit family’s disapproval easily.

What also fired my interest was Mom’s view that Rosa was a complicated person: Basically, a people pleaser to those closest to her, but privately, an intellectual independent, righteous streak about her.  “She was, in my opinion, smarter than her husband, full of sense but society wouldn’t let her speak her mind. Rosa had a way of getting involved in things under the radar; mind she wasn’t an outsider for the sake of stirring things up, you see. She wanted to do the next right thing, and deep down, that was what she believed.”

The most delicious yet sad part of Rosa’s story was what Mom hinted at years ago — a mystery about Rosa, that was based on her willingness to always walk a righteous path, to be cool with her conscious at the end of the day.

A stubbornness that ultimately drove a wedge between my great-grandparents, that made Richard Sr. do something despicable.

No wonder my 92-year-old aunt hasn’t wanted to talk about it. She was a first-hand witness to the drama; she saw what it did to my grandmother Barbara.

And yet, the story was irresistible — and surprising — given how it eventually connected me to Emmett.