Most of the contemporary articles I found about Emmett were read as they came in, in no particular chronological order.  To keep things straight, I cataloged every detail I found into a timeline. 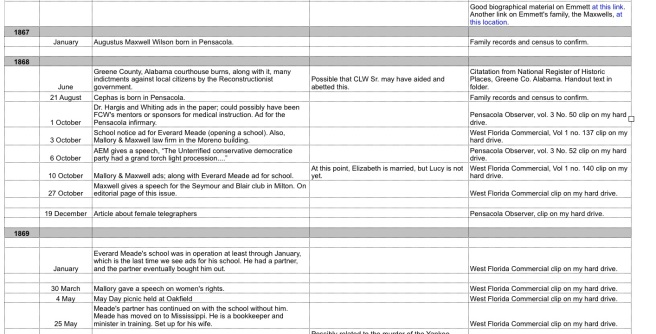 The first column is the date of the article, the second column summarizes the story, the third column are my notes, and the fourth column includes publication information, as well as a link if one was available. I had to break the timeline into four different date-specific files towards the end of data collection because of the amount of information.

After three weeks of reading and documenting articles about Emmett, I took a few days off to clear my head. When I came back to the timeline, I saw some items about Emmett with new eyes. For example:

Emmett would make sure to let the newspapers know when he was headed off on vacation every year. We do something like this today in social media. Maybe this was Emmett’s version of Facebook. Source: The Pensacola Journal, August 5, 1908

In the 21st century, you don’t see the comings and goings of a U.S. attorney reported on a society page; maybe this was a thing back then, you know, like Facebook?

And I was curious — did Emmett actually give this information about his comings and goings to the society editors on a regular basis? It seemed petty and pompous, the idea he was planting information in the paper himself about himself. If he’s that important, he’d not need to do that, if you see what I mean. He wasn’t ‘news’ yet, but it seemed he sure wanted to be.

This would prove to be one of many examples in the articles I found that Emmett, a die-hard Democrat without a lot of experience but good family and political connections, landed this job during a Republican administration out of nowhere — he’s even quoted in the article as being surprised he got the appointment, because he hadn’t even applied for it. Other candidates with more experience were not pleased, and his lack of experience despite being promoted to prominent, lofty positions was turning out to be regular thing across his career.

I know it happens all the time, but that still doesn’t make it right. And yeah, I still didn’t have all the details about this story yet. I admit that I had to tamp down my irritation at Emmett — I had to quit thinking, “Who the hell did this guy think he was, asking me to tell his story?”, and “Was he some kind of pompous ass pretending to be more important than he really was?”

Or was there something else?

And then, something else jumped out at me from the timeline:

If he was such a social climber, ambitious, and popular, as per the information I had on him at present (spanning about 10 years), it was odd that he died alone, without anyone knowing he was sick….

….that he was so public yet in the end, so few people knew what was going on with him.

“Numerous friends…were visibly shocked….” See what I mean? The Pensacola Journal, May 30, 1918.

That didn’t seem right. Something was awry.

There was much more to come.