I have interesting information — some in the form of primary sources! — about the Wilson family’s tenure in British Honduras. 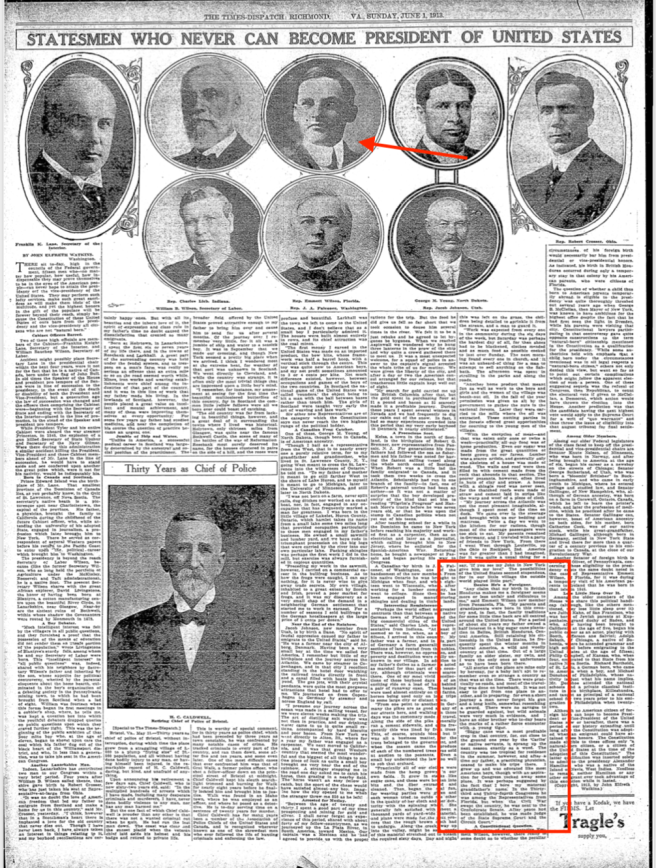 I’ve annotated the page so you can see where the information on Emmett is located. Source: Richmond (VA) Times-Dispatch, Sunday June 1, 1913.

I’d like to start with this article, an interview with Emmett during his first term as a U.S. Congressman, because it is presented as his words.

Here’s what he said: 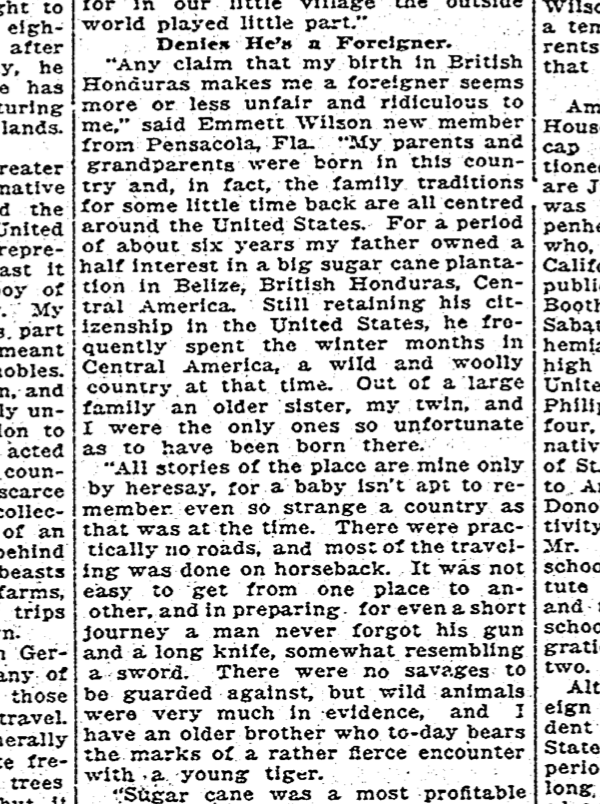 The interview with Emmett, as he explains his birth in British Honduras. 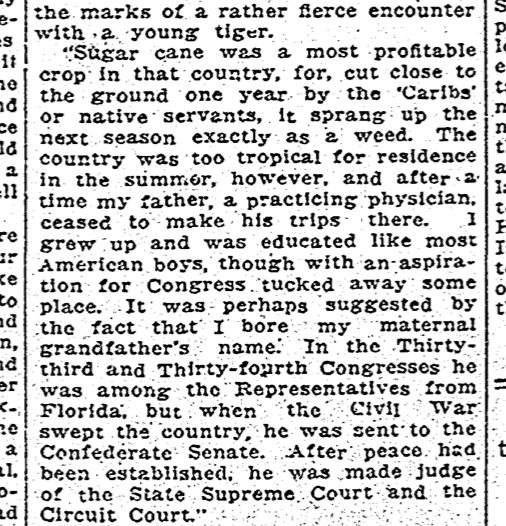 This is the last part of the interview.

Emmett explains some things, but there are still questions unanswered.  For example:

There was a lot more to this story than the impression Emmett gave that his parents were on a temporary break. Since I couldn’t ask him directly, I picked the major fact from his interview apart and did some research on it.

Here’s what I discovered:

1) Eudora Neely Wilson, born in 1876, in Holly Springs, Mississippi and

In 1884, the Wilsons immigrated back to the U.S., through New Orleans. The youngest son, Walker, was born in Chipley that same year. 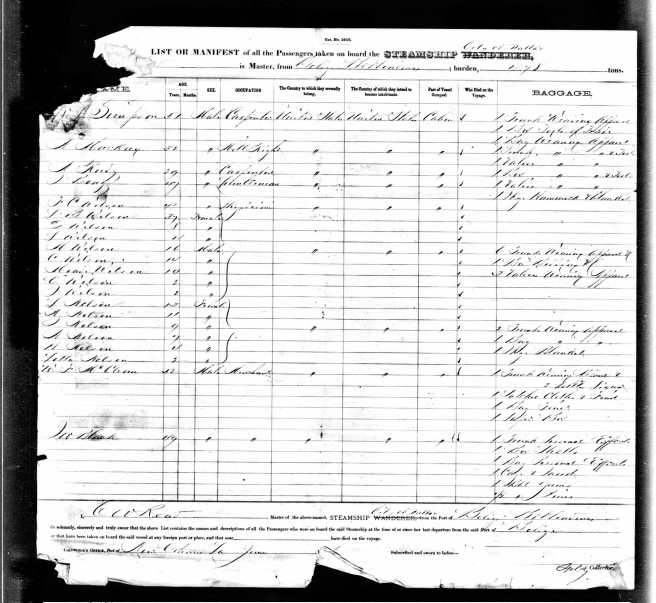 Manifest of the passengers on the City of Dallas, June 1884. The Wilsons only had a few trunks of possessions and clothing to take back to the United States, not much more than they had brought with them on the original trip to British Honduras back in 1875. Source: NARA, via Ancestry.com

If we do the math, with Katie born August 1878, then we know the Wilsons were probably in British Honduras at least from 1878 on — and 1878 to 1884 is seven years. It is possible that Dr. Wilson was already in British Honduras with his family starting in 1878, then decided to invest in the sugar plantation while he was there. But Dr. Wilson was methodical — I believe he probably had this plan in mind BEFORE he relocated his large and growing family to a foreign country which, I estimate, was early as 1875.

He’d need resources to do this, because life as a former Confederate during Reconstruction days was difficult, as well as expensive, and I posit that Dr. Wilson’s trips to Central America were rare, given what I know about the Wilson family during their Holly Springs, Mississippi days.

You can read the entire original posts about the Wilson’s first years of marriage during Reconstruction here and here; but here’s what I found out about the Wilson’s. It tells a completely different, and disappointing, story than what Emmett reported about the family’s situation behind the move to Central America:

[From 1870 to about 1875] Emmett’s parents were living in Holly Springs, Mississippi, with six young children, renting a house next to Elizabeth’s sister, Lucy Maxwell Meade and her husband, Everard. The Wilsons has been married almost 10 years, with not much to show in terms of money and professional opportunities. Emmett’s father, Dr. Frank Wilson, was a dedicated and well respected country doctor, having a difficult time making ends meet during in Reconstruction-era Mississippi.

Meanwhile, things were not going well for Dr. Wilson’s parents [in Alabama], Cephas and Emily Wilson and Dr. Wilson’s siblings, who were struggling to keep the homestead (property taxes were high; the Cephas Wilsons has lost almost everything at the end of the Civil War). Survival was becoming an exercise in futility, as money was running out, time was running out. The Cephas Wilson family had few options, and did not relish the idea of becoming homeless. 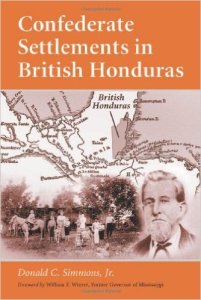 Confederate expats settled in British Honduras with the idea that they would recreate another plantation world. Very few were successful; Emmett’s family tried to get a sugar plantation going, but it failed miserably. Source: Amazon.com

Cephas and his sons had come across a pamphlet, Charles Swett’s Travelogue of 1868 (copies are still available today, via Amazon.com), which described a group of ex-Confederates from Mississippi and other Southern states who had fled Reconstruction to settle in British Honduras (now Belize), and recreate a plantation life. The British government wanted settlers who knew how to grow sugar and cotton, and were willing to relocate, establish the crops, and make a good living. Several members of the Alabama Wilson family thought this was a good option, took what remained of their savings, and, in 1869, emigrated to Punta Gorda, British Honduras.

Apparently, Dr. Wilson felt the money and opportunity to live among family members, and away from the struggles of Reconstruction far outweighed the struggles the family would face relocating to a jungle with no infrastructure and minimum civilization. Things were that bad for the Wilsons, apparently.

This was not just a situation of being disenchanted over minor things.

Emmett’s parents must have believed that the economic and political situation in the South was not going to improve, and their best bet was to start over somewhere else, even if that was in a jungle. At least other family members would be there with them. 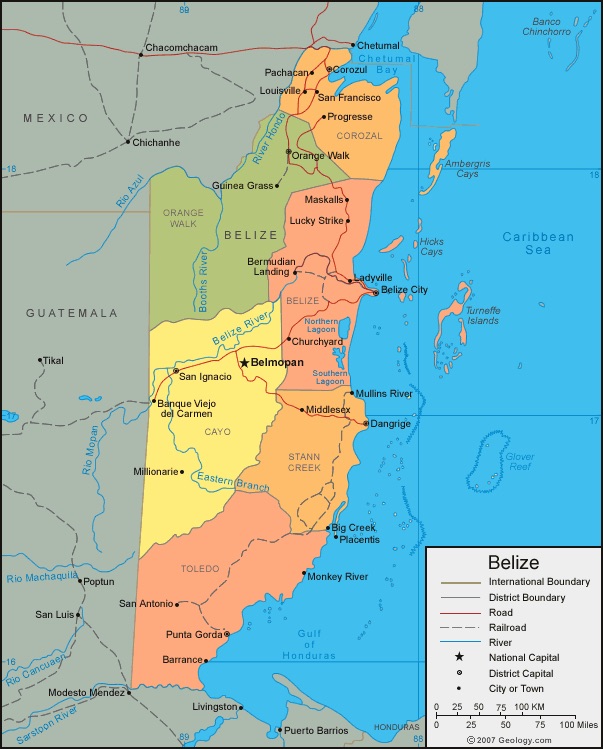 The Wilsons lived in Toledo Settlement, Punta Gorda, British Honduras (now Belize). They emigrated from the Port of New Orleans to Belize City; then traveled by ox cart down to Punta Gorda. There were few roads; this was not an easy move for this family. Source: http://www.scf.usc.edu

Oh — and by the way — while Emmett’s parents were setting up house in British Honduras, Elizabeth Maxwell Wilson and several other expats (who were relatives of both the Maxwells and the Wilsons that relocated) helped establish an Episcopal parish in that community — a parish that still exists today.

I ask you: If you knew that you are visiting a country for a temporary stay, would you establish a parish?

OK, we can argue that some people might do it (for example, my mother-in-law is an Episcopal priest, so she might think about it) — but to me, to do it just as a visitor strikes me as arrogant and assuming. Yes, build a house for yourself, or a clinic, for your community. But a parish? That strikes me as long-term.

I believe the real reason WHY Dr. Wilson moved his family to British Honduras is that Emmett’s family was trying to recreate the life they had during the confederacy.

THIS was more likely why his parents and other relatives emigrated to British Honduras.

As I write this, it is important to remember that I’m not judging them; just stating the facts that the Wilsons were a product of Confederate society, that was the way they lived, that was what they knew (for better or worse) at the core of their beliefs and traditions, that was the life they wanted. The Wilsons were not ‘bad’; they believed in different things than what I believe.

These were the values modeled for Emmett and his siblings, and shaped who they were; who Emmett was — and — although this is Emmett’s story, we need to know something about his parents, too.

Back to the original point of this post: Was Emmett, then, a foreigner?

I’m not trying to tease you, but because this chapter is so long,  I’ll answer this one in the next post. Thanks for hanging with me on this long story.