August 12, 2021Chevy Chase, Maryland I offer a summary of Emmett’s life, in the context of what was going on with different members of his family, and the friends he kept in 1907. I do this because I have very little primary documents about Emmett’s life; however, the context of […] 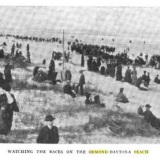 Paul CarterOrmond BeachMarch 27, 1903 The first thing we noticed when we arrived at the crowded beach, walking down from the boardwalk where our hired hack from the hotel in Seabreeze dropped us off, was the chill in the air, and the crisp wind blowing in from the gray-blue Atlantic […]

East Hall Stetson University DeLand, Florida March 22, 1903 (As narrated by Paul Carter) The five of us (myself, Emmett, Sturgeon, Anthony, DeCottes) are sitting in various degrees of posture on the front porch of East Hall, a large, white frame house that serves as a dormitory for 14 or […]

April 27, 2016McKeldin LibraryThe University of MarylandCollege Park Because I still don’t have a journal of Emmett’s, or, his scrapbooks (yet), I have to look at many secondary sources to get an idea of what his life was like at Stetson University in 1903. I found out from the Stetson […]

Chapter 59: I Begin at Stetson

September 25, 1902Stetson UniversityDeLand, Florida I stood outside Science Hall at 7:30 am Thursday morning, September 25; it was a clear day, a cool morning, but I was sweating and nervous. I hadn’t had anything to drink since I arrived on campus day before yesterday; I’ve been too busy getting […]

Here’s something new that turned up in Emmett Wilson research: A page honoring The Platonic Debating Society, which was the founding body of today’s Florida State University Debate Team. The photos come from the first yearbook published by the Florida Seminary West of the Suwannee River (which was FSU when […]

In celebration of Opening Day, we’ll take a look at Emmett Wilson through the lens of his pastimes: Sports. Emmett appears to have been both athletic and a sports fan. He owned and rode a bicycle to and from classes while attending Stetson University Law School in 1903. He attended […]

Emmett’s best friend, Paul Carter, was the original valedictorian of the Stetson University Law School Class of 1904. But fate — a job opportunity as private secretary to U.S. Congressman William Bailey Lamar — intervened. It was the opportunity of a lifetime for a smart, ambitious 23-year-old not even out […]

I’ve always had a feeling new information might emerge just as I was putting the manuscript to bed, and sure enough, that’s what’s happened. I’m not upset or dismayed — quite the contrary. But it does make me anxious for the future as I get close to publication. I want […]