The first thing we noticed when we arrived at the crowded beach, walking down from the boardwalk where our hired hack from the hotel in Seabreeze dropped us off, was the chill in the air, and the crisp wind blowing in from the gray-blue Atlantic Ocean. Although most of the spectators are dressed in somber colors, this is a crowd full of excitement — you can hear the thrill in everyone’s voices and see the wonder on the faces. This event is a novelty; perhaps history in the making, and we are here for it!

A snapshot of the races at the beach, from 1907. While I don’t have a photo of the crowd from 1903, this would not be too much different from the scene Paul and Emmett saw at Ormond at the race. Source: The Motor Way magazine, from Google Books.

“Look, Paul,” Emmett said, one hand holding his Stetson onto his head, as he nodded down the beach toward a group of onlookers.

You couldn’t miss it — Alexander Winton perched atop his automobile, the Bullet. It is shiny, bright red amid the dun colored sand and spectators. Our group moves quickly over to Winton’s car, joining the crowd, straining to get a closer look at the man — and his machine. 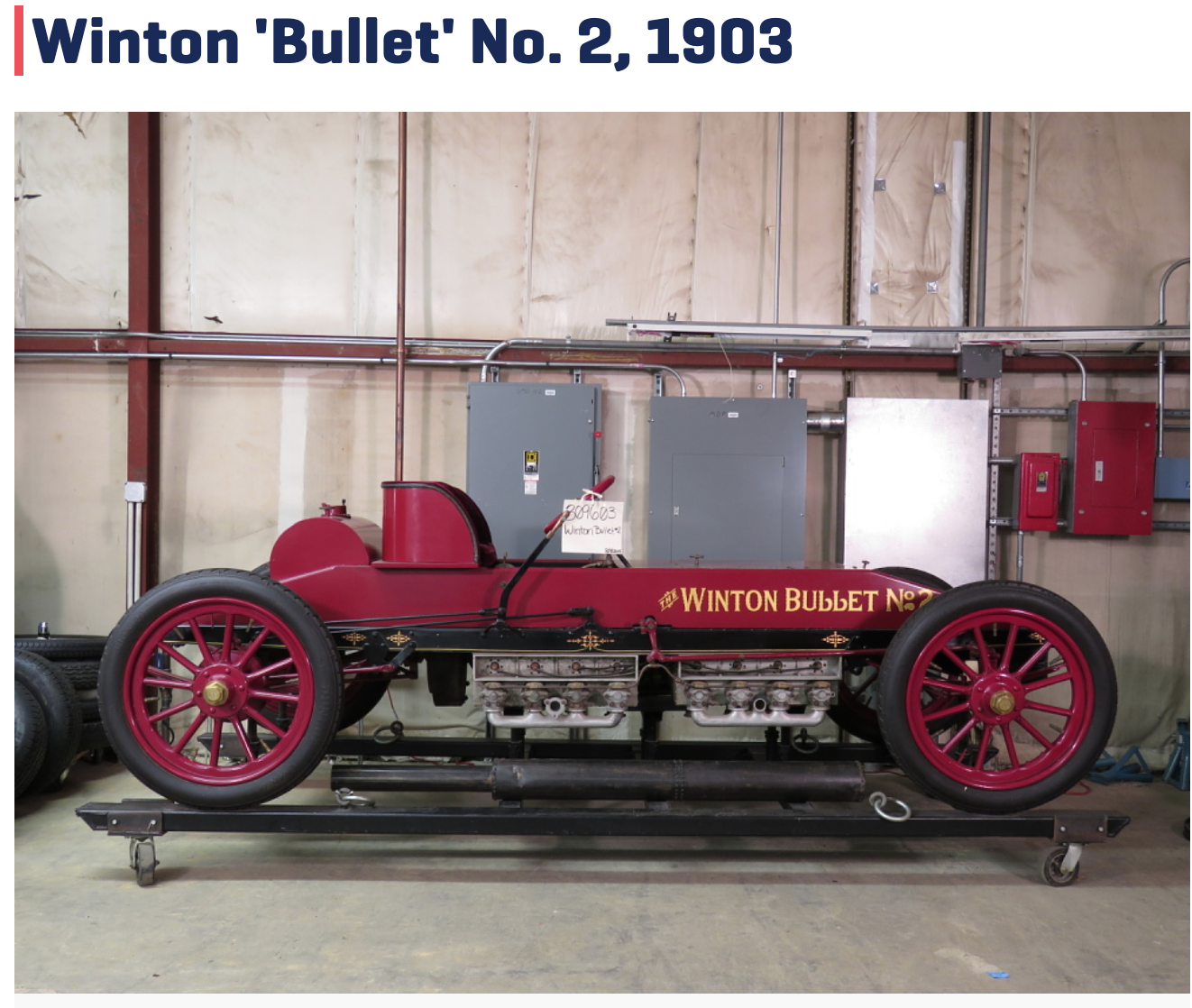 Alexander Winton’s automobile from the race. This is the car Emmett and his friends saw. Source: National Museum of American History, Washington, D.C.

As we walk together, I hear one of the men nearby say, “The beach surface is reputed to be one of the fastest natural speed courses for automobiles in the world; the sand is almost as hard as concrete, and about 30 miles long. We don’t even have roads in that good of condition.”

Indeed, minus the large crowds, this is an excellent location to race anything — bicycles, land yachts — at low tide, you had a surface that was 300 to 500 feet wide, like a huge concrete sidewalk.

“Why don’t we walk down a bit, away from the larger crowds, so we can get a good place to watch the race?” asked Pearl Spaulding, who had come over to stand next to me and Emmett. Pearl had come to the beach with her mother. “I’d love to get a good look at the automobile as it flies along the sand!”

Pearl stepped forward at that moment to say something directly to Emmett, but he starts briskly down the beach by himself, a man focused on his destination, his hand now and then touching the telegraph wire that was strung up to mile marker posts all along the straightaway route.

I glance at Pearl — she and her mother exchanged a look — they are taken aback. The two of them watch for a moment as he walks quickly ahead of us; Alice Spangler leans forward and says something quietly to Pearl. Pearl nods, then they, along with several other students from Stetson follow him, with DeCottes and Berry and I taking up the rear.

Emmett stops and shakes hands with the timekeeper, a man from the Auto Club of New York, who was posted at the half mile mark, and immediately starts asking questions about the Morse electric timing clock and the race. “Of course he’ll talk to that guy,” I say to DeCottes. “Emmett was an expert Morse telegrapher while he was in high school and working for the L&N Railroad.”

“Where are the other cars and drivers?” we hear Emmett ask  the timekeeper.

“Supposed to be a race, the best three or four going up for the Ormond challenge cup. Well, when Winton drove up in his fancy contraption earlier today, the other drivers got scared, withdrew their entries, the sonsabitches,” he said, gesturing to the group of automobiles and drivers still parked at the beach about a quarter of a mile down from the starting line. “Excuse me,” the timekeeper apologizes to the ladies standing nearby. “Winton will race anyway; go for a straightaway speed record again, but he’ll also race H.T. Thomas and his Pirate later today. You won’t be dissatisfied. But don’t be surprised if the drivers get brain damage, going that fast,” the timekeeper adds. 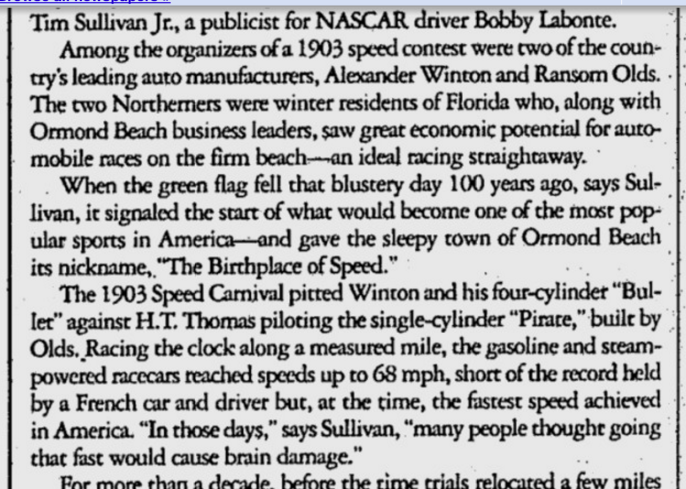 People really thought one could get brain damage from speeding cars. From the article titled “Gasoline in his blood,” Source: The Ellensburg Daily Record, April 5, 2003, via Google Newspapers.

As Emmett continued to talk to the timekeeper, Berry, DeCottes and I watch as Pearl’s mother, Alice Spaulding, nudges her daughter towards where Emmett is talking with the timekeeper.  Pearl walks over to stand near Emmett, smiling and nodding at the timekeeper, as if she’s part of the conversation.

“Uh oh,” Berry said, at that moment, nudging my shoulder.

A well-dressed dandy of fellow, a popular Stetson University student, strolls up to us. He wasn’t staying with our group in Seabreeze, but at the Hotel Ormond, with the wealthy crowd mostly from up North. The dandy shakes hands with several of the Stetson students, calls greetings to others. He glances around, and sees Pearl standing next to Emmett. The dandy said a few other words to the crowd, tipped his hat to Alice Spangler, then walks over to stand next to Pearl, who is next to Emmett.

“Who’s that?” I ask DeCottes and Berry, nodding at the man who was conversing in low tones with Pearl, and shooting Emmett occasional stern glances.

Emmett and the timekeeper are still deep in conversation; Pearl touches Emmett’s elbow briefly, introduces Emmett to Roland, and to the timekeeper.

Emmett nods, said something briefly, then continues the serious conversation about the timing and Morse code, and appearing not to notice Pearl and Roland — who still stand by awkwardly.

Pearl then inclines her head towards a group of Stetson students, a silent suggestion to withdraw. They politely excuse themselves to Emmett and the timekeeper, and join other students a bit down the beach, who gather about them, smiling, laughing and talking animatedly. It is clear that Pearl and Roland are considered a couple, but they are standing a little apart from each other; the air between them strained and awkward.

“What’s all that about, Pearl, Emmett and Roland?” I ask Berry.

Before he could answer, suddenly, in the distance, we hear the crowd shout and cheer — the timekeeper at the half-mile post suddenly announces to all that the race was to begin —

“Take your places, folks,” a man calls, as everyone gathers around the mile marker, and along the telegraph wire, leaning over expectantly —

One of our group brought binoculars and is reporting what he is seeing to our group of onlookers.

“Winton’s seated in the automobile. He’s putting on his visor —

In the distance, we hear a loud roar as Winton starts his car. The crowd shouts and cheers!

“There’s an official stepping up the starting line. He’s raising a pistol in the air —

We tense and hold our breaths.

The bright red automobile leaps forward; the onlookers at the starting point cheer as it speeds along the hard, packed sand, the onlookers running to catch up to the car as fast as they can — but they can’t! — the car nears us as we stand anxiously, excitedly, watching the smoking, speeding red car coming closer, closer —

— and it sweeps by us in a red blur! Woosh!  A cloud of white smoke envelops us quickly, thickly. There’s an intense, strong smell of burning gasoline —

— suddenly we see Emmett running along the straightaway to to catch up with the car! His Stetson clutched in his hand! He’s sprinting, shouting, excited waving and running —

And we can’t help ourselves — we all chase after the car, running towards the finish line with the rest of the crowd! Berry and I were going at a good clip — I hear laughter behind me  —

— and Pearl Spaulding! She’s running faster than any girl I’d seen before, in full dress, intent on catching up to Emmett, her skirts caught up in her hands laughing and cheering as she runs — Barry shoots me a look, and we can’t help it — we both start laughing.

When we arrive at the finish line, we meet Emmett, who was standing to the side waiting for us.

“Winton finished the mile in about 58 seconds; doing a little better than 50 miles per hour. Isn’t that amazing?” Emmett said, with satisfaction, pushing his hat back on his head, and surveying the crowd. “Think about what it would be like if we could just travel around like that every day. Think about how much easier it would be to attend court, and cover a law practice. You could get so much more accomplished.”

Behind us, we hear the voices of several of our friends from Stetson; mostly out of breath, laughing, and talking excitedly among themselves. Pearl’s cheeks are flushed with the exertion, her brown eyes were clear and bright, her hair coming down a bit on the sides. She comes right up to us, gasping, but exhilarated.

“Wasn’t that wonderful?” She gushes to us. “How exciting! Is he about to race again?” She exclaims enthusiastically all at once to Emmett.

I don’t know if Emmett understood what was obvious to me, DeCottes and Berry, but Pearl, a popular socialite who frequently had men fighting for her attention, had run along a beach in a dress, gasping for breath, just to try to catch Emmett’s eye. She was really trying to get his attention.

It is as if Emmett is the only man who wasn’t paying attention to her — and that was driving her to do anything to get his attention.

Maybe it worked. Because at that moment, Emmett gives her his flat, half smile, and said courteously, “Perhaps later; there are  other races today.”

Winton restarts his automobile; he is turning it around, driving at a much more sedate speed back to the starting point a mile down the beach. The crowd follows to retake spectator positions.

Still out of breath, she asks Emmett, “Do you mind if I walk back with you?”

He shrugs noncommittally. “All right.”

Barry, DeCottes, and myself follow Pearl and Emmett at a slight distance, along with the rest of our group from Stetson.

As we walk to the half mile marker post, I turn back to see Roland in the rear — strolling with the rest of the group alongside Alice Spangler.