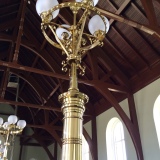 May 18, 2014, 10:45 a.m. Pensacola Historic District It wasn’t hard to find the parking lot behind the old City Hall building in downtown Pensacola. Even if my van’s GPS decided to conk out, one wouldn’t get lost. The darn thing is a hulking example of beige Spanish architecture. It’s […]

Here’s one of my latest acquisitions to the Emmett Wilson biographical research library: Surprisingly, it isn’t a dry tome, and it was a great deal! I ordered it from a book thrift store, and paid a grand total of $6, including shipping. What’s in here? Several interesting bios on Emmett’s […]

Just in Time for Halloween: The Death Tour

When I was in Pensacola, I had a list of places I wanted to visit, and as I put the list together, I realized I had a theme going — so, I decided to give it a name: The Death Tour. Apropos as we near Halloween. Stop one: 904 North […]

Folks, I’m spending a few days decompressing from the road trip to Pensacola. I have to take a few days off from research and writing about our guy because, frankly, I’m beat. It was a great trip, and I enjoyed it, but it was intense and compressed. I can’t get […]

According to my research, Emmett lived at the San Carlos Hotel, on and off between 1913 and 1918, although he gave his permanent address as the J. Walter Kehoe home. Because he spent so much time there, I’ve always been curious about what his room might have looked like. (The […]

Friends, I am writing a letter to this woman today. This is Leora M. Sutton, an amateur archaeologist and a historian who has written several research reports and articles about Pensacola, some of which center on Emmett’s time period. I’d like to get her impressions on Gilded Age Pensacola and […]

What Would Andrew Jackson Say?

Yesterday, I mentioned that Emmett’s grandfather had a law partner, S.R. Mallory, and they worked in the Mallory Building in Pensacola during Reconstruction. My friend and colleague, the excellent Jacki Wilson at the Pensacola HIstorical Society sent me this: Jacki told me that what was on the original site of […]

Readers, I had been planning another trip to Pensacola to get information on Emmett’s career as an attorney, District Attorney, and State Attorney during 1906-09. However, that second trip may be delayed. I found this today: Uh oh. I’ve kvetched about hitting roadblocks before, but this barrier is a significant […]

Readers, now that I’m back from the research trip to Pensacola, I can catch up on what I saw. I was pleasantly surprised to see that many of the buildings where Emmett lived and worked still exist, and are in good repair. This photo (right) of downtown Pensacola from 1910 […]