Readers, I just finished the second Brand Whitlock book, Her Infinite Variety, in two days. It was a quick read (only 185 pages), and thank God for that. It made me seethe, it was so damn irritating! Argh!

Her Infinite Variety, by Brand Whitlock. 1904. Free via Google Books.

Folks, I’ve never been what one would call a uber-feminist, but the way the anti-suffrage women and the clingy fiancee comport themselves in this book is just obnoxious. As I finished it, I thought that no self-respecting woman or man would allow themselves to be bullied and manipulated in this way — but the reality is, there are people out there who are treated this way, and take it. I only wish the state senator would have told clingy fiancee to grow up. Whitlock had other ideas with this book, though. 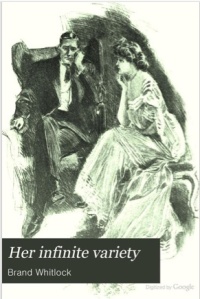 “But dear, if I get to vote, I’ll grow hair on my chest and become a man. Then what will become of me? Wahhh.”

Surely the women of 1904 did not think that upon gaining suffrage, that their voices would immediately lower and they would grow chest or back hair? What were they afraid of? I’m still not really sure why women fought it.

While the characters were irritating (well, except the woman lawyer fighting for suffrage), Whitlock depicts the mindset of women (and men) in general in 1904 towards suffrage. If the 19th Amendment was going to become a reality, those supporting women’s suffrage had a long, tough battle ahead of them, and I’m sure that was Whitlock’s underlying message.

By the time Emmett Wilson got into politics, less than 10 years later, the view of suffrage had changed, and was now a national issue of importance. While he did vote against suffrage at the beginning of his congressional career, by 1916 Emmett eventually became a supporter of women’s suffrage, and was actually the only member of the Florida delegation at the end of the 64th Congress to publicly state his support of the legislation. Of course, he was also on his way out of office; but I believe he realized by this time that it was, indeed, only right that if women were paying taxes and earning their own salaries (as many were at this point) that they should have a say in elections.

I dare you to read this book. It does irritate, but Whitlock does educate, in an oddball way.