It’s natural during the writing process to come up with new questions. I have a good one today. 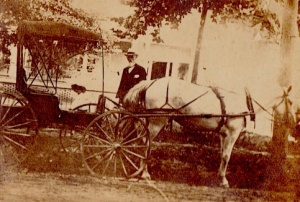 A major character in the first chapter-in-progress is Emmett’s father, Dr. Francis Childria Wilson. He was a beloved community doctor in Emmett’s boyhood home of Chipley, Florida.

People in Chipley loved him. According to my sources, Dr. Wilson truly had the healer’s touch: A good diagnostic sense, a good bedside manner, and compassion, no matter if you were black, white, rich, or poor.

Dr. Wilson had only been in medical school a short time when the Civil War broke out April 12, 1861. Five days later, he walked off the school campus and right into an enlistment office in Lynchburg, Virginia. Suffice it to say this did not go down well with Dr. Wilson’s father, who was footing the bill for his education. Dr. Wilson stayed with his regiment until the war was over.

By 1866, he’s in Florida and practicing medicine, but he couldn’t have gone back to school during that time. I have his service record that states he was in every battle his regiment encountered during the war.

So, what were Dr. Wilson’s medical credentials in 1866? If he didn’t get a traditional medical school education, what was his training? Battlefield triage and meatball surgery a la M*A*S*H?

And if so, was Frank Wilson the “Frank Burns” or “Hawkeye Pierce” of his unit?

Given his reported compassion, skill, and sensibility, I think he’s more Hawkeye than Frank Burns…but you never know. I’m finding a lot of interesting and unexpected things in Emmett Wilson’s research. Stay tuned.