Here’s the latest conumdrum from this week’s research:

I find myself immediately reacting to what I read rather than remembering that life in 1914 did not include things I take for granted in 2014, such as: 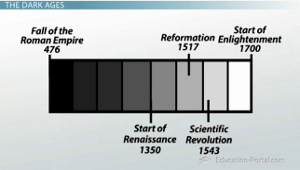 Er, yeah, to say Emmett lived during the Dark Ages would be a bit of a stretch. Image source: http://www.education-portal.com

I also admit to making the following statement after reading about everyday life in Emmett’s time, to wit: “Those poor slobs; they were living in the Dark Ages.”

That’s neither fair nor objective for a researcher; however, I am of the school where one admits failings as a means to conquer them. So, I admit this:

I have 21st Century Lens Syndrome.

I’m sure this is common among other researchers; I suppose this is normal. What concerns me is that I don’t want this attitude creeping into the writing of Emmett’s bio, which is underway (and very much a rough draft). I’ve seen it happen in other history texts and bios, and frankly, its obnoxious. We, of the 21st Century, have seen and experienced progress with life’s issues, but we for sure have not eradicated all of them.

Writers of history and biography, we must watch our reactions to our research material. Otherwise, we come off looking like a bunch of asses.

Let me give you an example. Look at this photo which was taken on a street in New York City, in 1905:

When I first saw this photograph, I thought, “Why aren’t those children in school? Where are the parents? That poor animal, why didn’t someone call the ASPCA?” and so on.

This is not a pleasant photograph, but if any of us were to step through and talk to the people in that picture, they may not have thought anything was wrong or strange; and in fact, one child is actually pointing at photographer. (It was unusual and perhaps strange to see a camera and photographer in 1905 — maybe not so unusual to see a dead horse lying in the street.)

Service horses, especially those in cities, had hard lives. They may have been well cared for, but when they died, they could be placed in the street for removal by animal control (work in the busy livery stable nearby had to go on), and this was a common procedure.

A sanitized look at life in 1904. Image source: IMDB.com

The children in the photo are barefoot, playing in the dirty street near the dead animal, with no apparent adult supervision. As a mom, I admit this made me cringe. We know that nowadays, at a minimum, social services would have been called in, and parents cited for neglect.

I don’t particularly like what I see in the photo, but it is a fairly accurate window into what life was like back in Emmett’s day. Nothing here was necessarily ‘broken,’ in other words. It is hard to look at that photo, though.

Finally, a common idea I used to have about the early 1900s came from images depicted in the Judy Garland movie, “Meet Me in St. Louis.” Of course, this wasn’t reality for most people living during those times, either.

It has been quiet here in Tell My Story land, but that’s because I’m writing and editing like a madwoman. Classes resume mid-January (I’m teaching nine hours this term), and the children will be home for Christmas break for two weeks. Thankfully, the muse is cooperating while things have slowed down in the office, and I’ve been productive.

I’ll have more updates on the writing process and progress later this week.