The excellent Angela the Archivist over at Stetson has this to share with us today:

A 1936 Bachelor of Arts diploma from Stetson University — in LATIN! Source: http://digital.archives.stetson.edu/cdm/ref/collection/Memorabilia/id/254

I had mentioned to Angela that I suspected Emmett’s diploma was in Latin, but because I didn’t have anything on hand from 1904 (when he graduated), I wasn’t sure. Nowadays, of course, most U.S. universities provide diplomas are in English.

She’s checking with the law school to see if they have anything in their archive from Emmett’s time — but — and this is cool — she said that she saw a diploma from 1916, which looked much like this version from 1936, and it, too, was in Latin. (I love her email signature line: At the bottom, it says, “Go Hatters! Go Archives!”)

The diploma makes me curious about Emmett and Latin. Latin was offered in some high schools, but I doubt it was offered in the Chipley public schools in 1900. 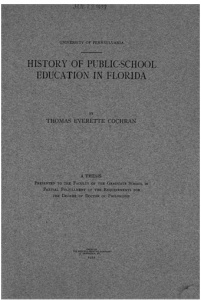 A good source for information on public schools in Florida. Source: Google Books

Reports about Washington County public education during the years Emmett was enrolled indicated that, on average, the schools operated only four months out of the year. Many county residents were upset about this; the problem was then (as it is today) about funding and staffing. Public school teachers (mostly single women) around 1900 were paid $25 a month. The average income for an adult (male) was about $400 a year. It was hard to attract good teachers when the state didn’t have enough money to pay a faculty member for a full year’s instruction.

Knowing this reinforces the idea (to me, anyway) that Latin would not have been a instructional priority, but mathematics, reading, English, science — absolutely.

I don’t think the county public school teachers during Emmett’s day were against teaching the classics, but we are talking about a community where a practical education would have to come first, especially if you know you have only a four-month ‘school year’ in which to instruct students.

Thinking about how much I had to struggle with Latin reminds me of my high school Latin teacher: He was an ultra-serious Catholic priest named Fr. John Brock who took crapus magnus from no one. He was one of the two teachers I actually feared when I was at St. Joseph High School — the other was my typing teacher, a nun named Sr. Clarissa, a Sister of Mercy who was only 4’11”, but had no problem twisting the ear of a 6′ football player and dragging his ass down to the principal’s office if you were anything marginally disrespectful in her class. 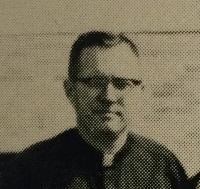 Fr. Brock died about four years ago. I wish I’d thanked him while he was still around. Image source: SJHS

I say all this because everything I learned from both of these teachers has stuck with me all these years. Fr. Brock expected nothing but the absolute best our his students at all times. The subject was challenging, and Fr. Brock was challenging — and none of it was boring.

I wonder who was Emmett’s most memorable teacher, and if Emmett liked Latin. It is too bad his grade reports aren’t around anymore. I’d like to have known if his Latin grades were as bad — or better — than mine.