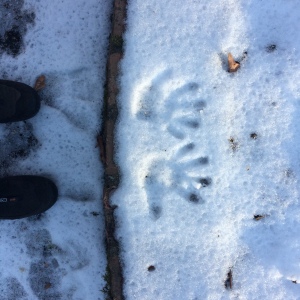 My son’s handprints in the snow. Not much of a ‘blizzard’.

Oh, and snow. DC didn’t get ‘hammered’ by the ‘historic blizzard;’ just an inch or so of snow. Because no one knows how to drive on it (DC is a ‘Southern’ town in many ways), the schools closed.

DC is also known for having the most impatient, self-absorbed drivers in the nation (which is why I use public transportation whenever possible). Honestly, staying off of DC’s roads, regardless of weather, is a good idea. But I digress.

Despite all of that, I’ve made progress on Emmett’s story architecture. I now have three walls of my office covered with notes. It looks odd to the outsider. I can tell you, though, this feels right to me. I told a friend this week that I’ve been digging for information for so long that unless I get all of it out in the open, and have it all around me, details will be out of sight, out of mind.

The nice thing about all of this is revisiting the data after not seeing it for several weeks or a few months is that I am seeing relationships and details that I didn’t observe several months earlier. I realize this is also about perspective: I have more background information on certain people, places, events. It is one thing to collect data just on Emmett; collecting data on those closest to him (friends, family, foes) really colorizes and animates this story, if you see what I mean.

My neighbor, who is the director of Landmarks (the public art program at the University of Texas at Austin) told me the other day that what I’m doing reminds her a lot of what Proust did in creating his books: As Proust created his novels, he would move sections of his writing around like a puzzle, looking for the best fit. 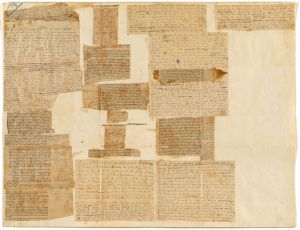 I wonder if Marcel would have considered using butcher block paper too? Source: http://www.pinterest.com

I’m no Proust. I’ve yet to read Proust. Maybe she shouldn’t compare this to Proust. I appreciated knowing that, though.

Speaking of information, several weeks ago I discovered that there are several years’ worth of The Chipley Banner (Emmett’s boyhood home newspaper) at the University of West Florida that I hadn’t seen yet. Again, this was a discovery that happened as I began mapping the story, and checking back personally with sources.  I don’t always do this and I should. Librarians and archivists are there to help.

Here’s the backstory: Chronicling America (the historic newspaper database of the Library of Congress) has a lot of The Chipley Banner digitized, but it doesn’t have every single issue ever produced. I went back though the dates, and saw several missing years. If you click on the link that says, “Libraries that have it” (for interlibrary loan purposes), there is a list of institutions, but this list is often incomplete or out of date. 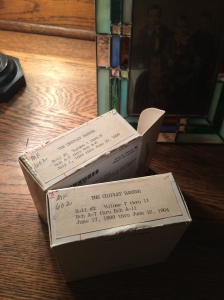 The moral of the story: Don’t just look at once source and think it is complete. Ask around.

So, I contacted an archivist friend at the University of West Florida and asked if they had other issues not listed on the LOC source. I told her exactly what I was looking for. “Why yes,” she said. “We have that in our repository on microfilm.”

Once again, proactive research pays off. I admit, though: It is hard for me just to pick up the phone and call a library out of the blue to ask the questions. This is something I need to get comfortable doing. Librarians and archivists don’t mind your asking questions, especially once you get to know them.

Finally, I came across this little gem on Ebay a few days ago: 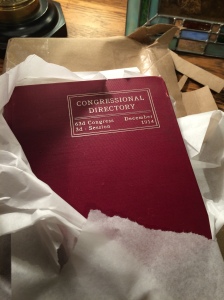 It is in excellent shape for being over 100 years old.

It did not belong to Emmett, but he had one of these. The cool thing is that it has all kinds of great details in there, like Emmett’s phone number and office number during his first term as a Congressman.

I’ll be back in a few days with an update on the story architecture and some interesting things I’ve found in the microfilm.

Enjoy the rest of your weekend!