Good news: The story architecture is roughed in. My colleagues have gotten used to the new wallpaper, and more than a few have commented favorably.

The story architecture adventure has turned out to be a good teaching tool. Students who visit my office see that I practice what I teach.

My adult learners all want instant gratification, and that extends to their writing. They want to get the process down, boom, and move on with their lives. I understand that. A lot of the work in writing is also about discovery when you develop this structure, and you can’t hurry that part of the creative process — because it is a process. For example, in doing the story architecture wallpaper, a very subtle yet important relationship between two characters in Emmett’s story suddenly became crystal clear, and more important than I’d previously realized. I never would have seen this relationship otherwise.

Also, the more you can organize and structure your data, the less onerous the writing.

One adult learner mentioned that writing, to him, seems formulaic. While some writing does seem to follow a pattern, the underlying goal in communication (especially written communication) is to inform. A good message/essay/story follows an orderly, logical sequence. Does that make it formulaic, though?

===
Last week I mentioned reading The Chipley Banner microfilm for 1893-1899. That’s what I’ve been doing in between classes and story architecture. Emmett was a boy during most of this time span; no mention of him yet, but I’m only up to 1895.

But, yesterday, I found this: 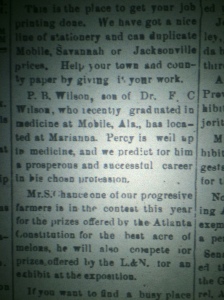 A piece of the puzzle falls into place. Source: The Chipley Banner, 1895.

This fills a research hole I had back in October when I was trying to track down where Emmett’s older brother Percy went to medical school. His record said he went to the Medical College of Alabama (which now is a part of the University of Alabama at Birmingham). But at the time Percy attended, the school was in Mobile. I had figured the campus was up around Tuscaloosa, or, near the Wilson family home in Greene County, Alabama (where Percy and Emmett’s father’s family resided).

Tagged as: Medical College of Alabama The Chipley Banner