I Know Where You Were

I do periodic revisits of different databases, since they are updated from time-to-time. For example, Chronicling America (one of my favorites), which updated their electronic holdings of The Pensacola Journal back in June.

Sometimes I just don’t catch everything on the first run-through. Database revisits are akin to editing drafts. You have to take some time away so that fresh eyes can see the treasure!

Yesterday, I took a look at Shorpy.com, a wonderful database of historic photos, and saw this:

Zoom in on the fourth floor, corner office, and you see this:

The law offices of Evelyn Croom Maxwell, Emmett’s uncle, and, law partner at this time. Maxwell and Wilson formed a partnership January 2, 1908.

This was where Emmett was working from January 2, 1908 until about 1909. As soon as the American National Bank Building  (nowadays, Seville Tower) was built, Emmett hung out his shingle there with Walter Kehoe, on the 7th floor.

American National Bank Building, the tallest structure in Pensacola for many years, on the right. Emmett’s office was on the 7th floor, facing Palafox and the Customs House, which was right across the street. Source: Shorpy.com 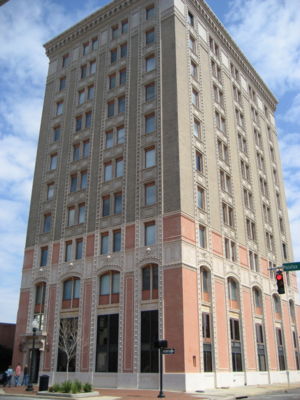 Maxwell did a lot of ‘paving the way’ for Emmett when he first moved to Pensacola in September, 1906, after the humbling experience he had working for Nicholas Van Sant in Sterling, Illinois. Emmett came home to Florida with a fresh new look at what it really means to be a lawyer on your own (i.e., he lost a lot of the cocky attitude he had prior to the move). Maxwell was important in legal circles. It was through his influence that Emmett, a green lawyer with little depth of experience, was made temporary Assistant District Attorney for his circuit just weeks after relocating to Florida. Emmett had a lot to prove; others with more experience were going after that job, too, and were surprised the plum went to Emmett. Politics works that way, you know, boys and girls.

I’m sure Maxwell got wind of the opportunity and presented it to Emmett, because in an interview, Emmett had told the reporter (a bit naively in my view) that he was surprised he got the position, because he hadn’t even applied for it in the first place.

Anyway. I can see Maxwell saying, you know, nephew of mine, I am going to bat for you here and I can probably get this for you. But, if you screw up, it reflects on me. It’s a good opportunity for you to establish yourself in politics, since you need some public service under your belt. It’s part-time. You can build up experience with me in the practice here, as well. Win-win.

But don’t screw it up.

Emmett strapped on the big boy suspenders, got to work, and did not disappoint. By all reports, Emmett distinguished himself. He was the youngest DA in the United States at the time. People were watching him, expecting him to screw up, which I’m sure he did from time-to-time, but overall, did a great job and title went from temporary to permanent ADA a year or so later.

I can tell you that that corner office in the Blount Building was Maxwell’s. The office extended along the left side of the building for a few windows’ worth of space.

Emmett probably worked, sat, gazed out of one of those windows every day, contemplating his future, thanking his lucky stars that he had a fresh start and an uncle who was willing to give him a chance.