He just stopped coming around.

I found out a few days ago that someone I knew from my AA home group died of our common disease.

We used to see him all the time at the club (what we call our regular meeting rooms at a local church) several times a week.

He had many years more sobriety than I do. He was a kind person. A good man. He’d listen to you, He told funny jokes. But more importantly, he shared his story with us in the group, and in his story, I heard my story.

Whenever I hear my story coming from someone else, it has this effect of righting my thinking. I feel more grounded. It saves my life; I don’t feel the need to escape my life anymore (if not drinking, through other mind- and soul-numbing addictions that still bother me). I’m not terminally unique.

How it happened: He just stopped coming around. He wasn’t seen in the rooms regularly. Then, not at all. In a very short time, his disease was back in full bloom (alcoholism takes up where you left off; there are no ‘start-overs’).

I don’t know what happened that he stopped coming to the rooms, but life has a way of getting in the way of sobriety, and that old feeling of wanting to escape your own life because you don’t feel comfortable in your own skin is always under the surface somewhere.

That old feeling sneaks up on me if I’m not careful, and I’m guilty of wallowing in it, turning it into a pity party. For this alcoholic, that’s the doorway to drinking. I will let piddly little problems keep me from meetings or calling my sponsor. If I don’t get to a meeting at least once or twice a week, the dry drunk behavior kicks in. I start feeling angry at the world, then at myself for being so angry. Then, I want to escape feeling angry…yada, yada, here come the numbing/escaping behaviors… See where I’m going here?

This is how it happens for many alcoholics. Cunning.

Anyway. My friend started isolating himself; turned to the booze. It became his world once again. We don’t know why. No one knew where he was, no one knew he was that sick. There was something else wrong with the guy, health-wise (also, thanks to alcoholism), but if he stayed away from the booze, took his meds, he would be fine. If he drank again, though, didn’t take his meds, didn’t take care of himself, he’d kill himself.

Which is what happened.

Know why I’m telling you this story?

Remember me saying earlier that this guy’s story was my story?

Well, it turns out that this guy’s story is also Emmett’s story, the end-part, anyway. Maybe the whole story, too. This guy used to say he drank to escape feeling anything. So did I. Probably so did Emmett. 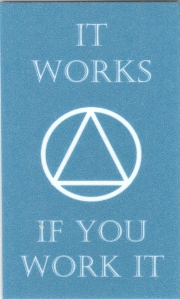