After yesterday’s post, I couldn’t just leave Max and his branch of the Wilson clan dangling there on the family tree, unexplored. So, I decided to dig around today.

As mentioned, Max and his wife Belle Fannin Wilson had 11 children — but more accurately, they had 12, with 11 surviving childhood into adulthood. A quick check of the U.S. Census Reports does not reflect the complete family. Eleven children? How do I know this?

Thanks to Katie Wilson Meade and her notes, I have a complete list from which to work!

The first child on the list is Lalla Elizabeth Wilson. She appears on the 1900 U.S. Census (below).

She’s at the Columbia Institution for the Deaf, Dumb and Blind — or, as we know it today, Gallaudet University. 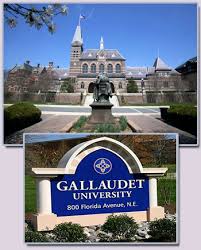 I did not expect to find that Max’s oldest daughter, Lalla, was deaf!

I don’t know if she was deaf as an infant, or, if perhaps she lost her hearing through illness.

The 1920 Census information gave me a clue to explore schools and institutions catering to the deaf, and sure enough, Lalla Wilson shows up again — not in Florida, but in Massachusetts, and specifically, at the Clarke School for the Deaf in Northampton, Massachusetts.

According to the school’s annual report, below, she graduated in 1918:

After graduating from the Clarke school, it appears that Lalla applied and was accepted to Gallaudet in 1920. Tuition was free; but, admission was competitive and limited to one or two students from each state at the time. Lalla must have been an outstanding student; not only did she graduate with honors, she appears to have had a great time while she was in college.

She managed the basketball team and an officer of the Jollity Club! Source: Gallaudet Archive

One other item of interest: Lalla’s alumni record. Note Lalla’s family contact and sponsor prior to graduation:

Lalla’s local contact and sponsor was her Aunt who lived in Clarendon — that would be Katie Wilson Meade! I sent a copy to Katie’s granddaughter! Source: Gallaudet Archives

After Lalla graduated from Gallaudet, she worked in a library in Jacksonville for a few years, then, taught in St. Augustine, at the Florida School for the Deaf and Blind.

It looks like she kept in touch with the alumni association at Gallaudet for several years; the last contact reference for Lalla is for 1957. Apparently, she was still teaching in St. Augustine as per the alumni card.

The last bit of information I have is from Find-a-Grave:

Lalla’s buried at Evergreen Cemetery in Jacksonville. There are no other Wilson family members in the same plot. Source: Find-a-grave

I don’t know how she died, or the exact date. I have not found any record of her having married, or having descendants.

So, that’s all I could track down for now.