We continue the exploration of A. Maxwell Wilson’s progeny. There’s four more children to meet: Warren, Woodrow, Harry, and Edith.

Belle and Max named him for the current present; their brother Emmett was in his administration. Max obtained a postmastership (which was a presidential appointment back then) from President Wilson. They were staunch Democrats.

Wouldn’t it be ironic if said president’s namesake would later register as a Republican? But I digress.

For this particular search, I began at the end; i.e., an obituary. One of the most recent information sources I’ve found is an obituary for A. Maxwell Wilson’s wife, Belle, from the Panama City (Florida) News-Herald. 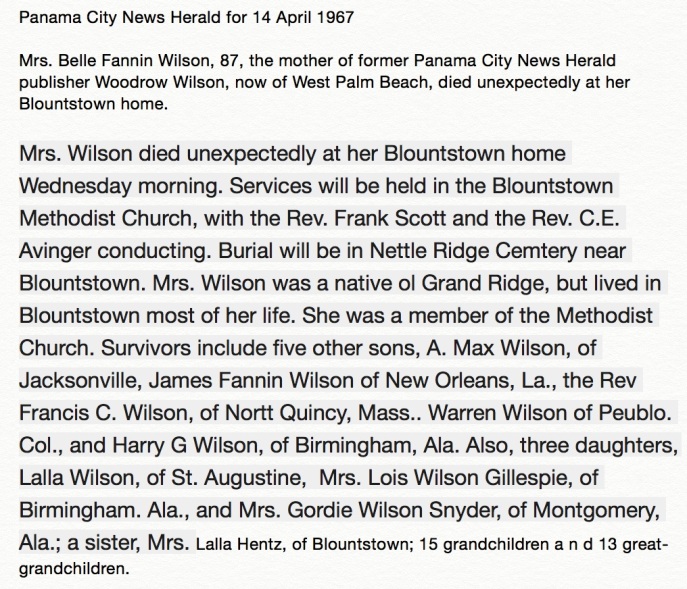 The text looks strange because I captured it from OCR text and saved it using my notepad function. Long story. 🙂  The Bay County (Florida) library has a copy of this. Source: Panama City (Florida) News Herald.

Woodrow’s name is not listed in the 1967 obituary, which is curious, not only because he was still around — he died in 1978 — but also because of a huge accomplishment in his career, which gave him national attention.

Here’s what we know about Woodrow, son of A. Max, according to U.S. Census reports:

In the 1940 Census, Woodrow is 26 years old, and the publisher of the Blountstown newspaper. This is interesting, because Woodrow followed in the footsteps of his father, who was the publisher of the Blountstown paper for a few years in the early 1900s, but gave it up. Whereas Max did not succeed in journalism because his heart didn’t seem to be in it, ink runs in Woodrow’s blood. He does well at Blountstown; as his talent increases, he moves on to a bigger paper.

What’s really cool is what happened in 1962: Woodrow was listed as a member of a Pulitzer Prize-winning reporting team! He and three other reporters won the Pulitzer for articles exposing local corruption within the police department in 1962. You can read about the history of the paper here, which includes how the award-winning reporting came about, for more information.

Talk about brave — exposing this corruption within the community in which you live. We can only imagine how tough that must have been on his family.

On July 11, 1968, Woodrow was named director of research and public informational services for the Panama City school system, according to an article on page 1 of the Panama City News-Herald. His wife, Carolyn, was hired to serve as his secretary.

Woodrow died in 1978; Carolyn died in 2003, in Panama City; she and Woodrow are buried in Forest Lawn Memorial Cemetery in Panama City.

If Max or Emmett had been alive in 1962, I’m sure they’d have been proud of Woodrow.