That Rumbling Sound You Hear

That rumbling sound you hear?

That’s Emmett turning in his grave.

And he’s probably not the only former Florida politician spinning around today, either.

Typically, I don’t discuss politics with anyone. Some of my friends think this is a little ironic, given the fact that Emmett Wilson research involves quite a lot of early 20th century politics.

But, I stay away from the topic altogether. I don’t mention it in my classrooms, or in my book club meetings (if it comes up), or at family gatherings. I know better. If someone asks me what I think, I’ll say it, because I believe it, and I know not everyone shares my point of view.

I can appreciate a difference of opinion. And sometimes, I’ve changed my mind on issues, because someone else made a good point — different from my own — and I could accept it because it was presented in a rational, logical way.

But when a ‘debate’ turns into a pressured session where one party simply wants to convince me that I’m wrong (and often, that is because I am the lone representative of that viewpoint in the room), or, when the discussion turns into ad hominem attacks, I’ll walk away.

I don’t mind having an actual discussion of the issues from time-to-time.

I don’t mind or care that people have different points of view and values than I do. What someone else thinks isn’t any of my business.

I appreciate the fact that we — people in general — can have different views on the same subject. That doesn’t mean that either side is wrong; but, the point is understanding the issue better. That’s what a debate is about.

That’s the reason why we have debates.

Not to talk about how stupid someone else is because they think differently from yourself.

Not to convince everyone that their manhood is of appropriate size, as if that has anything to do with leadership. 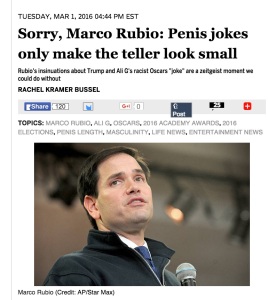 You can’t call that debacle known as the “11th debate” on television last night a debate. That was embarrassing.

I can only imagine that Emmett, who was an excellent public speaker and debater, probably turning in his grave at the idea that his own state senator from Florida was discussing another candidate’s penis in a nationally televised ‘debate.’