Another Piece of the Puzzle

I found additional information that brings me a bit closer to finding Cephas Love Wilson’s descendants, and (hopefully), the Wilson family Bible, if it still exists.

Cephas was Emmett’s big brother, law partner, and surrogate father figure, so, he doesn’t play a small role in the telling of this story. Ceph was important even in death: He was the executor of Emmett’s small, pitiful estate in 1918.

What became of Emmett’s papers? Well, I know that Cephas inherited Emmett’s law books; it seems logical that’s where whatever legal papers, cases, files went, too.

The search is still on for Cephas Love Wilson’s papers in Marianna, thanks to the wonderful Sue Tindel at the Jackson County Circuit Clerk’s Office in Marianna (Thanks, Sue!). But I’m also tracking down Ceph’s descendants. They may have kept some of their father’s papers, books, or photos. I hope!

Cephas Jr. (1894-1985) was born in Marianna, and attended law school at Florida State College (now FSU). He didn’t become a lawyer, though (which probably irked Ceph Sr.); rather, he became a professional photographer.

Here’s the writeup of the Cephas Love Wilson family from the 1923 edition of History of Florida: Past & Present, Vol. 2, by Harry Gardner Cutler, page 349: 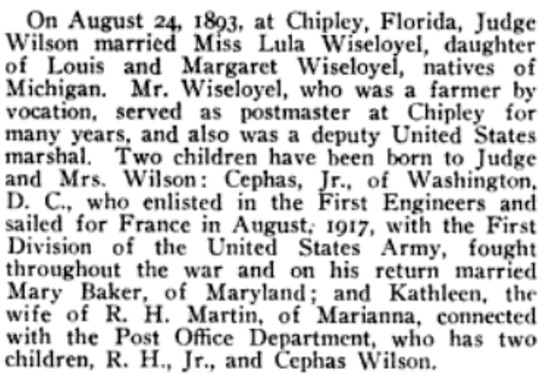 From History of Florida: Past & Present, Vol. 2. Source: Google Books.

Here’s the wedding announcement for Cephas Jr. and Mary, who also went by Mamie: 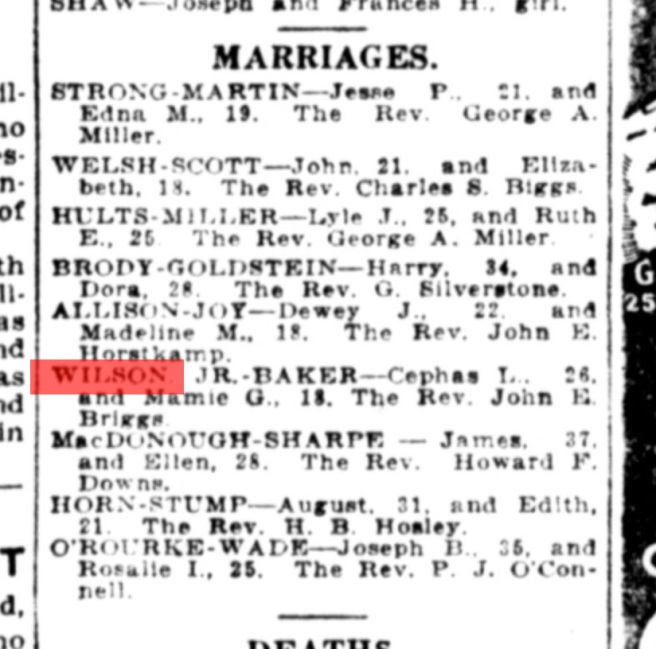 Cephas Jr. and Mary/Mamie Baker were married at the Fifth Street Baptist Church in Washington, D.C. 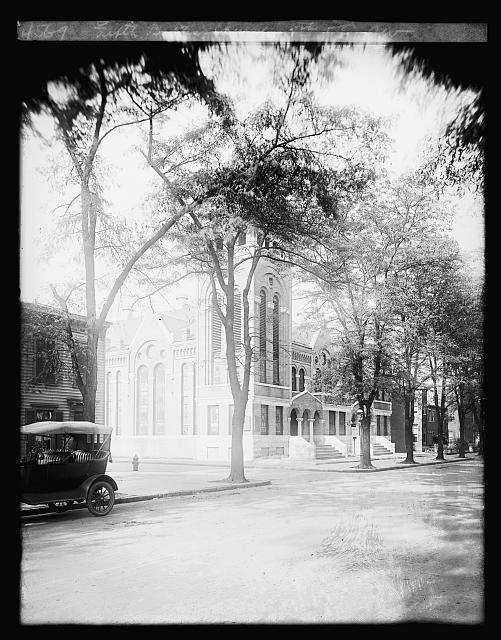 The next information we have is that Cephas and his daughter, Shirley, are back in Marianna in 1930. They are living with his grandparents, the Wiselogels. Cephas is a widower, and a newspaper reporter. I get this sad feeling that Mamie/Mary died in childbirth.

Ceph Jr. and daughter, Shirley, living in Marianna as of the date of this census, April 2, 1930. Source: Ancestry.com

We next see Cephas Jr. and Shirley in the Florida, 1935 Census. Ceph Jr.’s mother has remarried since the death of Cephas Sr. in 1923; she’s now Lula W. Grether. Ceph Jr. and his daughter have moved in with them in Jacksonville.

In the 1940 Census, we catch up with Ceph. Jr., who has remarried. He is now a professional photographer; the new wife, Louise Hughes Wilson, is a teacher. Shirley is in high school.

The last information I have about Ceph and his family, from the Jacksonville City Directory for 1942, is that the daughter, Shirley, became a nurse. Cephas Jr. and Louise apparently do not have any additional children.

Louise died in 1972, and is buried in Jacksonville National Cemetery. She is listed as the wife of Cephas L. Wilson, USA.
Cephas Love Wilson, Jr., died in Sumter, Florida, in 1985.
There’s no listing for Cephas Jr. in Find-A-Grave, but only 34 percent of Jacksonville National Cemetery is photographed/cataloged to date. I would guess that is where Cephas Jr. is buried. Maybe Lula Wilson Grether, too, but again, no listing just yet.

I’d love to find out about Shirley, and if she knows anything about her grandfather Cephas Sr., or, her great-uncle Emmett, or, if she has the Wilson family Bible.

I don’t know where to look next, as there is little information out there about Cephas, Jr. He was quite unlike his father, in that he didn’t go about telling the local papers his comings and goings; he didn’t have the same need for that kind of publicity, as his father did, building a political career.
Cephas Jr. probably relished not having that kind of public lifestyle.
Tune in again for the next chapter in tracking down Emmett Wilson’s family members, when we meet Cephas Jr.’s sister, Kathleen.