An Update on Cephas, Jr.

In case you are just tuning in, I’m trying to locate the Wilson family Bible. I’m betting that it is in the hands of the descendants of Cephas Love Wilson, Jr. (1894-1985). I haven’t found the descendant…yet.

But I’ve found something else: The Jackson County enlistment record for soldiers and sailors during World War I. (Thanks, Cindy Sloan!) 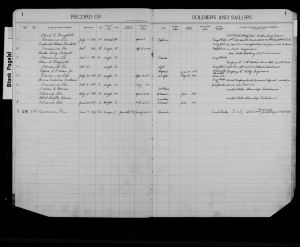 Here’s a close-up of the information on that page:

Here is the information on the other side of the page:

This information appears to be current as of the end of World War I, because Ceph Jr. was in D.C. until the late 1920s.

Isn’t that a great find?

I still haven’t found Cephas Jr., by the way.
However, this afternoon, I found a great database, the National Cemetery Administration’s Nationwide Gravesite Locator, which is run by the U.S. Department of Veteran’s Affairs.
I figured that since Cephas Jr. was a veteran, and, that Louise’s headstone reads “Wife of Cephas Love Wilson, Jr., USA”, that Ceph would be there, too.
So, I put Cephas Love Wilson’s name in the search engine, and it turned up a Cephas Love Wilson, Jr., but not the one I need (the Cephas I’m looking for was born in 1894). 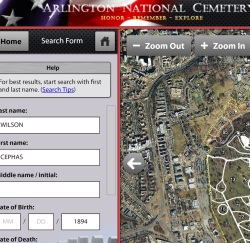 This tells me that Cephas Love Wilson Jr. might not have been buried with his wife, Louise Hughes Wilson (who is buried in the Jacksonville National Cemetery).

He’s also not at Arlington National Cemetery. Arlington has its own database, by the way. And yeah, I looked there, as well as for Cephas Jr.’s first wife, Mary/Mamie. Nothing.
The trek to locate the descendants of this Wilson family branch continues!