The final installment/study of Emmett and his junior-year college roommates at Stetson features John N. Worley, of St. Augustine, and Fred Fee, of Fort Pierce, Florida.

According to the East Hall essay, Worley was the master of tall tales. 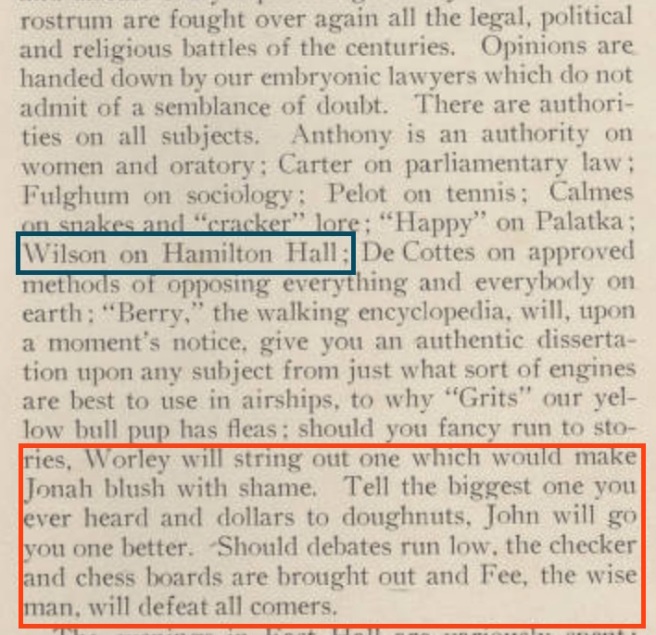 Worley and Fee are mentioned in the red box. Source: Stetson University Archives.

He was enrolled in the Liberal Arts program; and, according to the 18th Catalog of Stetson University, had no specific classification, but was taking electives at the University.

Unfortunately, I haven’t found much about Worley beyond a few articles in the Stetson University student newspaper. He mostly led a quiet life as a student on campus; he was Emmett’s dorm mate again in 1904 during their senior year.

I think life was hard for Worley and his family: Five family members (including an infant) died in 1918, likely victims of the influenza pandemic. There is very little additional information about him, other than the fact that his vocation was, first, as an engineer in the early 1920s, then, from the mid-20s onward, as a plumber in St. Augustine.

I don’t believe Emmett would have seen him on any regular basis; it appears that Emmett didn’t travel to St. Augustine during his lifetime. 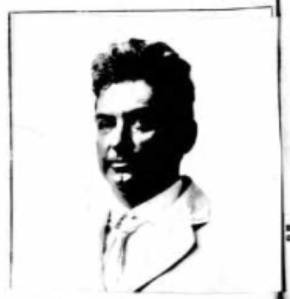 Fred Fee was born in Kansas in 1880, and attended Allegheny College in Meadville, Pennsylvania. He graduated from Stetson with both an A.B. in 1904, and an LL.B. in 1905. While he was at Stetson, he was a member of the Phi Kappa Delta fraternity, and he wrote articles for college publications.

Fee set up his law practice in Fort Pierce. In 1906, he was elected Judge of St. Lucie County; later, he served as mayor of Ft. Pierce. He has an interesting family, with deep roots in St. Lucie County: I found an obituary for his oldest daughter, F. Mary Fee, which goes into detail about her family’s life. You can read it for yourself at this link.

A youthful CHB Floyd. Unfortunately, he died at the end of the influenza pandemic, in Florida, about 1920.

A side note: Fee was the law partner of Apalachicola’s poet laureate and entertaining journalist-lawyer, Charles Henry Bourke Floyd. Floyd died in 1920, at the end of the influenza epidemic.

“Harry” Floyd, if you recall, wrote regular syndicated humorous and critical essays about Florida politicians and lawyers for several state newspapers. In one of his essays, Floyd specifically dogged both Gov. Napoleon Broward and Emmett about the fact that they were still unmarried (despite being besieged by women) and leading important, prominent lives. In 1912, people liked their governors and political leaders to be married, to appear ‘settled down,’ to conform to general society standards. Broward and Emmett were bucking tradition.

Floyd made much of this in one particular column that ran in 1912, in The Pensacola News, as he put the question, plainly, to both Broward and Emmett about their still-unmarried state:

“What’s wrong with you?”

I admit I didn’t dig really deep into each of the Earl’s lives; I would have liked to do it, and maybe I will, after I finish Emmett’s story.  Emmett spent a lot of time with these guys during what I consider some of the best years of his short life.

My idea was to get a general idea of Emmett’s friends, what they were like, what they did, where they were from, activities, sports, habits, and the like. People with similar habits and likes/dislikes tend to hang out together; and, until I get my hands on Emmett’s scrapbooks, I have to extrapolate what he must have been like via the college bios of his roommates.

It’s not a perfect approach to this research project, but it does give me an idea how to frame the chapter about Emmett’s time at Stetson.