For three weeks, I’ve been working through a set of microfilm generously on loan to me from the University of West Florida, specifically, the Pensacola Evening News for 1912. I just finished the last reel this afternoon, and my library will send the film back to UWF tomorrow.

This set of film had the .jpg images that I lost earlier in the year. It wasn’t difficult recapturing the images, because I made a detailed inventory the first time through, complete with specific issue dates and page numbers. But, it didn’t go as quickly as I thought, because I got caught back up in reading the darn issues again. 🙂

Since the first read-through, I’ve gotten to know Pensacola’s key players a lot better. Once again, I have come to the understanding that delays, do-overs, and having Mercury in retrograde is often to one’s benefit. I have more sinister and interesting details to include as I weave the story of Emmett’s life.

Another bonus: I found two articles specifically about Emmett I did not catch the first time around; the most important one is an editorial, a personal feature about Emmett right after he won his congressional seat written by C.H.B. Floyd.

Floyd was a clever and careful observer of all things political, silly, crappy, and he had a way of shining the light of truth onto his subjects. Floyd told it like it was: He skewered the overinflated egos of the pompous. If a public person had a character defect to make fun of, that is what Floyd did. But Floyd also honored those who tried to make an honest job of Florida politics. Emmett fell into the second category.

Finding this editorial was important, because Floyd knew Emmett. Both were lawyers and politicians; they ran in the same circles. Floyd’s observations are candid and honest, and provide a good look at Emmett the man — the young, obscure, earnest candidate, who ran a campaign with significantly less money and experience than his opponents.

A typical Floydism from The Tampa Tribune, June 1, 1914. Source: GenealogyBank.com

Floyd really liked Emmett, and he must have seen something about Emmett that made him lay off teasing Emmett about his inexperience in politics, because Floyd would continue to badger others who had more experience, more pomposity, less integrity; in fact, Floyd had a field day with his editorials against Tom Watson, who for all practical purposes was the Donald Trump of the 1912 presidential campaign.

Whereas Floyd would skewer the pompous and arrogant, he treated others who tried to live the life of integrity, with respect. If Floyd liked you, he would conclude his complimentary editorial essay with the line, “I give (name here) my sprig of laurel.”

In fact, Emmett was the recipient of Floyd’s sprig of laurel in the partial editorial that survives! 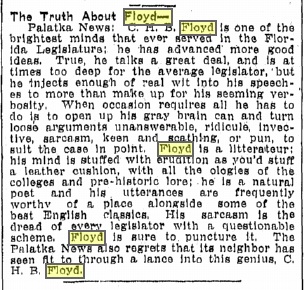 The Truth About Floyd, from The Tampa Tribune, July 3 1914. Source: GenealogyBank.com

Floyd was popular and well-loved; unfortunately, his career was short-lived. Floyd died of influenza towards the end of the epidemic in 1920.

The reason I missed it the first time around was because the page was torn in half, and that is all that was captured on the microfilm. Also, the original was not in good shape, and difficult to read. Emmett’s name is at the bottom, and it is misspelled.

Still, it is new information. Half a loaf is better than none at all, and I am grateful to have found it in the first place!

I have a message in to the excellent Dean DeBolt, the archivist at the University of West Florida to see if the hard copy holdings of this particular issue are complete. It is possible that the microfilm was shot using the hard copy that is on hand at the UWF archive, and so, all we may have is that half-column.

I’ll keep you posted about the missing half of the editorial!