I’m pleased to report that not only have I located Emmett’s doctors (both in Pensacola and Washington, D.C.), but I’ve also located his pharmacist. Pretty damn good History Detective work, huh?

I’ll have more on the doctors in another post, but I thought I’d introduce you to the pharmacist first, because she’s REMARKABLE.

Modeste was born August 1875 in Pensacola, the daughter of Dr. Robert Bell Smith Hargis. She had four sisters and two older brothers, Robert and John, who also were physicians.

Modeste decided early that she wanted a medical career, too.  According to a feature about Modeste in a 1909 issue of The Pensacola Journal, she accompanied her father every day on house calls and appointments, and he taught her everything he knew. She couldn’t have had a better teacher, either — Dr. Hargis was not only a yellow fever expert, he, along with Dr. J.C. Whiting, established the Pensacola Hospital in 1868. He was well respected, well known, and considered one of the top physicians in West Florida. It is quite likely that Emmett’s father, Dr. Francis C. Wilson, at least knew of Dr. Hargis, if he didn’t actually practice with him on occasion.

Modeste was interested in pharmacy, and Dr. Hargis encouraged and supported his daughter’s plans, even though it was still highly unusual for a young woman to enter a profession dominated by men.

“I simply loved anything connected with medicine and after my father’s health failed, I commenced the study of pharmacy though I did not know then it would ever be the means of my support.”

Modeste’s turning point came in 1893, at 18, when she passed the state pharmacy examination and was the youngest (and only) female pharmacist in Florida.

And less than three months later, Modeste’s father died. It is unclear what was the cause of Dr. Hargis’ death, but he died at home, at 109 E. Romana Street. Modeste’s quote gives us a clue that he was likely ill for a long time, and so his death was not unexpected.

It is not clear when Modeste opened her first pharmacy. However, records from the Pensacola City Directory for 1898 (the earliest one available for now) indicate that she was on her own:

Just for kicks, I looked at Google Earth to see if the original house or buildings are still at 107-109 E. Romana. Alas, no — only a few modern box-shaped offices and an empty lot.

The Hargis Pharmacy moved around a few times: In 1911, it was located at 8 E. Government Street — the location of Emmett’s office — in the American National Bank Building. I can imagine Emmett stepping out of the office, taking the elevator down to the first floor, to pick up a bottle of Bromo-Seltzer, and his brand of pomade (which I have not been able to figure out yet, but give me time). He could also pick up a bottle of beer or wine there too! Did you know the Hargis Pharmacy also made and bottled beer and wine? It’s true. Pharmacies could do that back then.

By 1916, The Hargis Pharmacy had moved down the street from 8 E. Government, to 203-205 S. Palafox. Still, only a few blocks’ stroll for Emmett, should he need to pick up toiletries, or whatnot.

Not surprisingly, Modeste was a friend of Minnie Kehoe’s, and, a supporter of women’s suffrage. Both were successful women business owners, too. I can well imagine those two getting together and having quite interesting conversations.

Modeste’s house at 611 N. Barcelona is still standing, too:

Modeste spent most of her life as a pharmacist. It is unclear when she sold or retired from business. In 1934, at age 54, she was likely retired at that point, because she is simply listed in the Pensacola City Directory at home.

But she wasn’t idle. 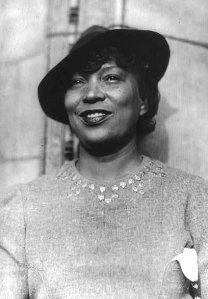 Modeste signed on with the Federal Writers Project of the Work Projects Administration (WPA) for the state of Florida. She co-wrote a series of articles that appeared in a variety of publications, including the Florida Historical Quarterly. Interesting — she was probably a colleague of Zora Neale Hurston!

Modeste’s most prolific year was 1939, according to Wordcat.org. She had NINE articles on a variety of topics, including Don Francesco Moreno, and an intensive study of Greek culture in Pensacola.

By 1942, Modeste was out of retirement and the director of the WPA Writer’s Department in Pensacola. From the 1942 Pensacola City Directory. Source: Ancestry.com

That’s a pretty decent sketch of Modeste for now; but there’s still a lot I don’t know about her. I wanted to search in the Library of Congress’ database this afternoon, but it is offline for annual maintenance until August 1.

One reason I want to dig around and discover more about Modeste was this interesting comment by the interviewer in the 1909 article: She was described as a violinist, and a ‘genius in the art of whistling.’

She must have been good at it too, because in 1927, Modeste had her own radio program about whistling! 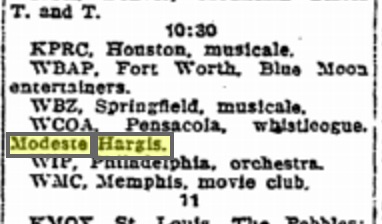 I wonder what was included in her show! Did she do all the whistling? Source: The Greensboro (N.C.) Record; February 21, 1927.

Emmett definitely had some interesting friends in his life, and which says a lot about Emmett. Getting to know his friends and what they were like helps fill in the blanks about his personal life somewhat — at least until I get my hands on his scrapbooks.