A Study of Perserverance

I have a lot of respect for people who will not let anything stand in the way of making a living, or chasing a dream.

This week, while working on Emmett’s chapter about his sojourn in Sterling, Illinois in 1906, I came across someone who Emmett probably knew — or, at least saw occasionally in downtown Sterling — who didn’t let his physical disabilities get him down.

I admit that my first reaction to this was negative. I think my initial response came about because of all the tacky political stuff going on right now in both presidential campaigns, and what people will do to get into political office.

If you look at this article, nowhere is there any information about this man’s ability to collect taxes in Whiteside County, Illinois. But it turns out he had a lot of gumption — and a lot of friends — who were willing to help him help himself. And now, I was curious. Who was this guy?

Daniel Joseph Long was born in Sterling, Illinois in 1869 to Irish immigrant parents who settled there in the 1850s. According to the 1860 and 1870 U.S. Census, Daniel’s father, Dennis Long, was a stone mason.

In the 1880s, Daniel attended the local Sterling public schools. He had an older brother, Timothy, and three sisters, Ann, Margaret, and Mary, who also went by ‘Mame’.

In 1889, when Daniel was 20 years old, he had an accident where he lost both of his legs. I couldn’t find any details about the how and why, but I did find another writeup about Long’s 1906 candidacy in the January 9, 1906 issue of the Sterling Evening Gazette, that provides some details, below: 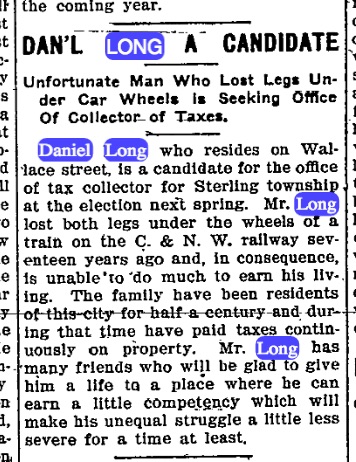 While I believe Long appreciated any help he was given to find a job, and become independent, I don’t think he liked the idea of trying to win an election by sympathy votes. He wasn’t someone who just sat back and let his physical disability define him: One year after his accident, he’s not only still in school, he’s also studying to become a railroad telegrapher.

So, Daniel’s friends saw the tax collector’s office as a good job opportunity for him: He was bright and competent; unfortunately, that wasn’t enough for him to win the race:

Long tried again the next year, but still didn’t win:

Over the years, Daniel continued to study and learn a trade. According to the 1900 U.S. Census, Daniel is living at home with his mother and his sister, Mary, and his occupation is listed as stone mason. But he never gave up the idea that he could run for public office and win — and sure enough, he finally won in 1907.

Daniel only served one term as tax collector; he was not elected again after his term expired in 1908.

After that, the information trail grows cold, and we have only a few additional details:

And finally, Illinois death records report that Daniel Joseph Long died in 1934 in West Chicago, DuPage County, Illinois on May 3; he was buried the next day in St. Mary’s Cemetery in Sterling. The report does not list the cause of death, but it did state that he never married.

Did Emmett know Daniel J. Long? I don’t know; but, he would have at least seen Daniel in the business district of Sterling on occasion. I doubt that Emmett would have voted for Daniel, though; Daniel was a Republican and Emmett was a Democrat.

Enough side research diversions! Back to Emmett’s chapter!