Emmett’s best legal education came not at Stetson University (where he was the valedictorian of the 1904 law class; it came not at the hands of his esteemed and experienced older brother, Cephas Love Wilson, Esquire.

It came when he was, essentially, fired from his dream job in Sterling, Illinois in late May, 1906. 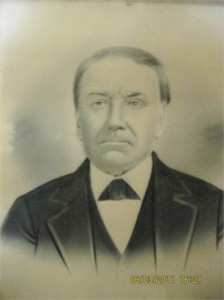 Emmett had left his home, his family, his old friends, and a decent job to move almost 1,000 miles away to start a new law partnership with Nicholas Van Sant.

Emmett’s criteria for his dream job:

He got what he wanted.

But four months into the dream job, he’s discovered that his situation isn’t what he expected. As the solo lawyer in the firm (Nick had a full-time job as president of the Sterling State Bank), he certainly got to immerse himself in the law — but he was awful at office administrivia — and I don’t think he was prepared for how much work there was to do with the cases, by himself, even with the help of a secretary.

I suspect Van Sant enlisted the assistance of one of his employees, possibly Frank Heflebower, to review the Van Sant & Wilson firm account books. From The Sterling Evening Gazette. February 22, 1906,

This was just the thing that Cephas had warned Emmett about back in Florida before he left: It wasn’t enough that Emmett was a good litigator. Running a law firm by yourself involves a lot of managerial and administrative skills that he just hadn’t mastered yet.

The loneliness got to him, too: Even though Emmett preferred solitude, it was because it was his choice to remain alone, on the outside of the social circle, if that makes sense. He was from a prominent social and political family in Florida, where he’d not had to worry about social acceptance — everyone who was anyone in West Florida politics and society knew him because of his family. Emmett didn’t have to put forth any effort to become ‘known’ back in Florida. His family’s reputation did that for him.

The red arrow is the approximate location of the Van Sant & Wilson law firm. Source: mygenealogyhound.com

But in Sterling, Emmett was an oddity, an outsider, an unknown. After having family, friends, loved ones in your face (and in your business) every single day, as it was for Emmett back in Marianna, it probably was a relief for him to be left alone. At least for the first few weeks.

The locals in Sterling were certainly polite to him, but it was hard for him to break into professional and social circles when you are (just about) the only Southern Democrat in solidly Republican northwestern Illinois.

What I think also did Emmett in was the fact that he had to actually work hard to become a part of Sterling’s political and social community.

Think about this: The social and political relationships linked closely to business relationships in this small town. Emmett hadn’t had to work at any of these relationships at this level before leaving Florida.

I estimate that by the end of April, 1906, he realized that the move to Sterling was a mistake. It wasn’t his legal skill; it was the fact that he didn’t fit in, personally, and he didn’t know what to do about that, because he’d never had to give that thought.

That’s when he slipped back into drinking for relief. Eventually, the drinking interfered with his legal skills, which is when someone (or something) tipped Nick Van Sant that something was awry with his protege.

Whoever (or whatever) it was, it spurred Nick to stop by the law firm one day to examine the books. Nick, himself, probably turned them over to his cashier, Frank Heflebower, who would have gone over the accounts carefully. Frank would have advised Nick that something didn’t balance.

The clue that leads me to think this was about poor financial management on Emmett’s behalf comes from an interview Van Sant gave in the 1950s where he discusses his long career, and mentions that just about the only year the law firm wasn’t profitable was the first one, when he’d only cleared $700 that entire year. The fact that Emmett was drinking (probably on the job) didn’t help.

They parted on a friendly basis: Van Sant found another partner who he’d known for several years and was local. It is likely Van Sant also absorbed losses incurred from his partnership with Emmett.

Emmett started his career over again, in Pensacola, working for his uncle, Judge Evelyn Croom Maxwell, wiser for the experience and uncomplaining about his lot in life (at least he did not complain publicly anymore).