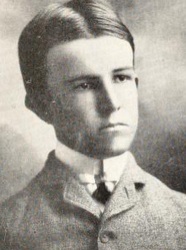 I’ve always had a feeling new information might emerge just as I was putting the manuscript to bed, and sure enough, that’s what’s happened. I’m not upset or dismayed — quite the contrary. But it does make me anxious for the future as I get close to publication. I want Emmett’s story to be complete and accurate; perhaps those damn scrapbooks will come to light with the publication of the first part of Emmett’s story!

I was checking back on a database yesterday — just something i do regularly, just in case — and I found an important but tiny detail that will make Emmett’s final chapter come together seamlessly.

In June, 1906, Emmett was on a self-imposed exile from both Sterling, Illinois and his adopted hometown of Marianna, Florida. If you recall from earlier posts, Emmett burned his bridges with brother and law partner Cephas Love Wilson when he left in December, 1905 to form a law partnership with Nicholas Van Sant in Sterling in January, 1906.

Only one month into his new venture, Emmett discovered that winters in Florida really were a lot better than northwestern Illinois; that he really wasn’t ready to run the prestigious Van Sant & Wilson law firm all by his lonesome. Emmett probably didn’t expect he’d be actually homesick for Marianna, for his nagging but well-meaning family — even big brother Ceph.

By the first week of June, 1906 (only six months into the venture), Emmett left Sterling permanently.  But Emmett didn’t go directly home to Florida; Emmett went to Washington, D.C. to visit his best friend, Paul Carter. 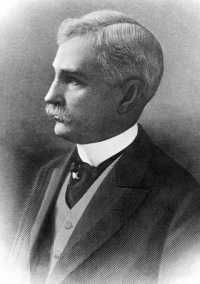 For a long time, I figured this was a consolation visit. It was only about eight months earlier that Emmett stopped over in Washington to talk to Paul about the idea of going into a partnership with Van Sant — and Paul didn’t think it was a great idea. Likely Emmett went back to Paul, certainly more humbled and (now) more willing to follow offered advice.

Emmett arrived in Washington on or about June 10, 1906, and apparently stayed there for several days.

Even though Paul would have been glad to host Emmett, he was going to be busy: Paul was only 21 and private secretary to U.S. Congressman William B. Lamar. Not only that, Paul was attending Georgetown Law School while working for Lamar.

If Paul was attending in law school in 1906, as had been reported in several different sources discovered, I was curious about his progress given the important job he had on Capitol Hill. He had to have been working his tail feathers off.

How was he able to maintain a job like private secretary to a busy U.S. Congressman and go to law school? What was the class schedule like? 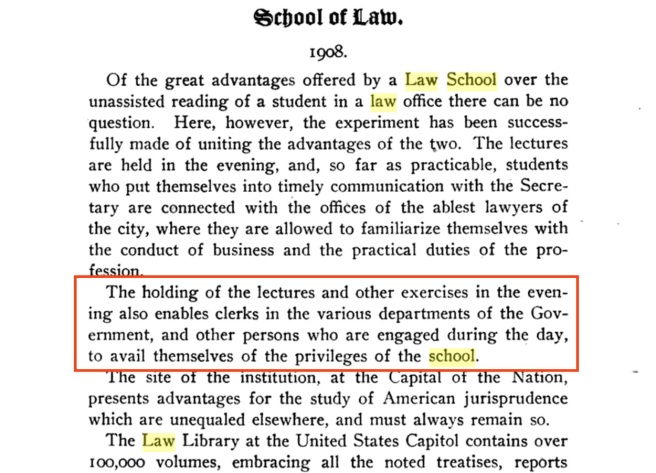 The 1906, 1907, and 1908 Georgetown University Law School Bulletins state that the classes were offered at night. That’s how Paul was able to work and finish his law degree simultaneously. Source: Google Books

The GU bulletins are wonderfully comprehensive: They include the lists of students enrolled, classifications, addresses, course schedules. But the search tool is not perfect — I would type in “Paul Carter” or “Carter,” only to have it miss a few Carters. This meant paging through several Georgetown University bulletins, starting with the 1904-05 catalog to be sure I covered everything.

I got to the very last section of the 1906-07 Georgetown University catalog — as in, the last three pages — and I was about to give up when I found this: 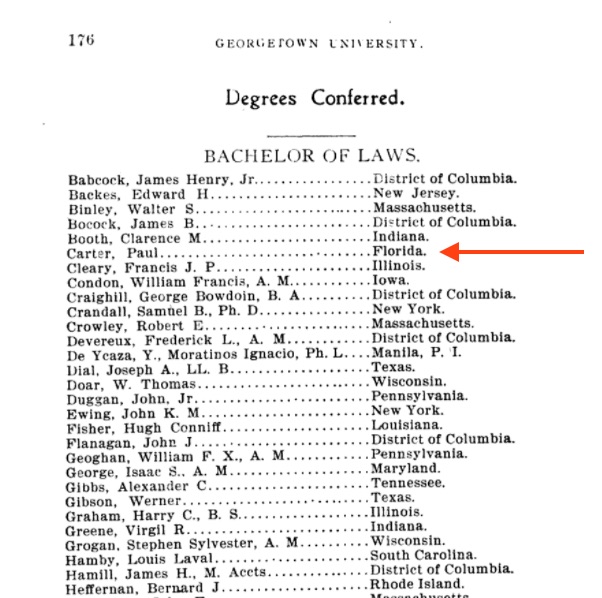 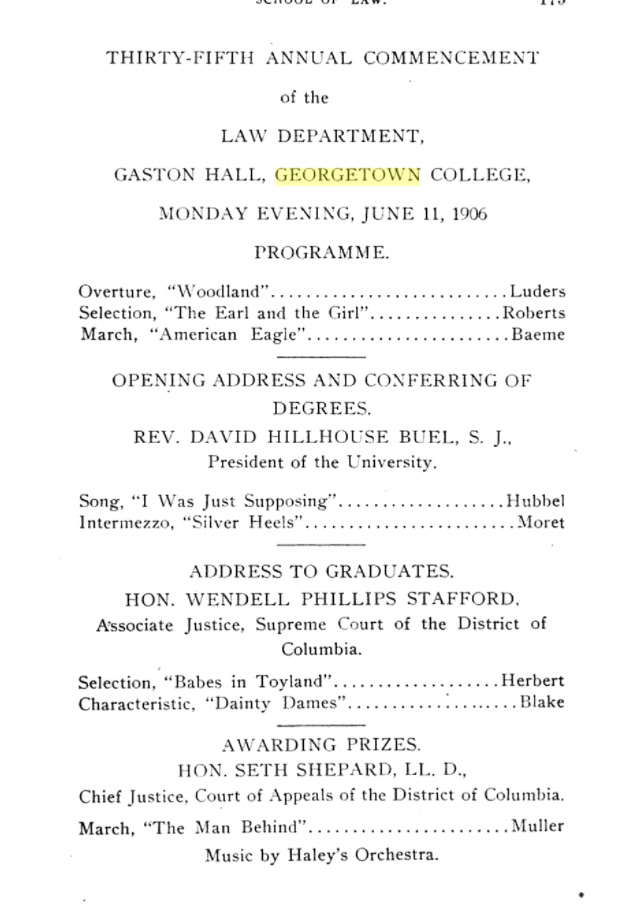 One final place to check — the D.C. papers. They were big on reporting graduation ceremonies from the local universities. Sure enough, we find that Paul not only attended the graduation ceremony, but he went out to a celebratory dinner for the law school graduates at the Raleigh Hotel:

The Evening Star, June 12, 1906, p.13. Those in attendance were listed. Paul was there; Emmett was not, though he attended Paul’s graduation. Source: Chronicling America.loc.gov

This latest detail adds so much more depth and context to Emmett’s final chapter. I’m just so thrilled with this last minute find!