The Mystery of the Pocket Watch 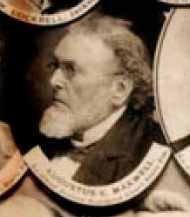 I don’t know what it looked like, other than it was smooth, silver, and had Emmett’s grandfather’s initials engraved on it — AEM — for Augustus Emmett Maxwell. It probably had a chain, and maybe a fob. I don’t know how Maxwell obtained it first.

Maxwell died in May, 1903, a year before Emmett’s graduation from Stetson Law School.  It is reasonable to think that family might have saved Maxwell’s watch — an expensive and precious heirloom — to give to Emmett as a graduation gift in 1904.

Maxwell was living with the Wilsons at the time of his death, and our Emmett, who was quite close to his grandfather was there, it would seem a grand gesture to the young man who modeled himself after a man who was truly interested in him. Emmett did not have this close relationship with anyone, other than his older brother, Cephas, and that relationship felt more competitive.

This watch was in Emmett’s possession, at least sometime after 1903. Either Maxwell either gave the watch to Emmett himself, or, family members gave it to Emmett after Maxwell’s death.

Emmett and his grandfather were close, had a lot in common, and were said to be very much alike in behavior and and appearance: Tall, quiet, loner-types, who read often, liked to take long walks, and enjoyed fishing.

They were the only two members of the family who attended law school: Maxwell attended the University of Virginia Law School; Emmett attended Stetson University Law School.

Emmett and Maxwell were also drinkers — I don’t know if Maxwell drank alcoholically, but he was reported to be partial to mint juleps so much that when he traveled, he made certain to bring a supply of sugar, in case there wasn’t enough on hand where he was staying.

Emmett was reported to be partial to any kind of alcoholic beverage (especially at the end of his life), and made certain to have a large personal supply of liquor stored at either the Osceola Club or the San Carlos Hotel, prohibition be damned. (Florida had already elected its first and only Prohibition Party governor; several Florida counties [including Escambia County], were already considered “dry” well before the ratification of the 18th Amendment on January 29, 1919.)

Of course, by 1919, Emmett was dead; what little money and few possessions he had long gone, including the silver watch, which was not listed among his personal effects at the time of death.

He might have hocked it to pay his bills. Or, perhaps, it was stolen during one of Emmett’s drinking adventures (he had alcoholic hepatitis at least from 1913 on; blackout drinking would have been a typical event for him).

Or, perhaps Emmett gave it another family member, knowing that he, himself, was an unstable drinker. Big questions around this small but important artifact in Wilson family history.

If anyone knows about this pocket watch, or, can share information about it, I’d love to hear from you.