New-to-me via my monthly check-in with various databases:

“Friends in Jacksonville and other parts of the State will regret to learn of the death of Mrs. Carrie Bond Wilson, widow of E. Meade Wilson, which occurred yesterday at the home of her son, E. Meade Wilson, Jr. at Mulberry, Fla.

“Mrs. Wilson was born March 28, 1872, at Brewton, Ala., and resided on Jacksonville for nearly 30 years. She was the daughter of Fisher E. Bond and Clara Nicholson Bond.

“Besides her son in Mulberry, she leaves another son, Frank M. Wilson; a grandson, Frank M. Wilson, Jr., U.S. Naval Reserve, and a sister, Mrs. Dora Walker. Funeral services will be held at 3 P.M. Thursday in the family plot on St. John’s Cemetery, Pensacola.”

What’s interesting about the obituary is that four other siblings-in-law were still alive, but were not named: Julian (Emmett’s twin), who lived in Montgomery Ala.; Dora Wilson Smith and Frank C. Wilson, Jr., who lived in Marianna, Fla., and Katie Wilson Meade, who lived in Alexandria, Va. 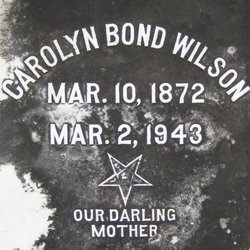 Carrie, Meade, and Emmett are buried together in the Wilson family plot at St. John’s Cemetery in Pensacola. Emmett’s grave is about five feet to the right of Carrie’s.