Chapter 3: Dissection Homework From the WFGS

Before I contacted the Pensacola Historical Society to find out more about Emmett Wilson, I made copious pots of coffee and immediately dissected the three articles sent to me from Peg Vignolo of the West Florida Genealogical Society.

Newspaper articles are rich with information — it’s not only the details IN the piece itself, but it’s the context to pay attention to when you read the articles: that is, what is said (subtly), what is not said (subtly), how the article is positioned in the paper, the language used about deceased, and so forth.

The Pensacola Journal, May 29, 1918, page one. Courtesy of the West Florida Genealogical Society.

Note the cause of death. Nothing in the obituary text gave a clue to his death — the writing didn’t focus on the cause of death, but seemed (to me) to deflect. A ‘very short’ illness could be anything: Appendicitis, for example. On the surface, ‘very short illness’ sounded innocent enough, so why not give the reader that detail?

[Aside: I wouldn’t realize until several months later, after I’d collected more information on Emmett and talked to Wilson family descendants that the photo in the obituary was almost 10 years old — it was the one he’d scraped money together to have taken professionally when he first ran for office in 1912.  The newspaper morgue at The Pensacola Journal would certainly have had one of the professional shots taken by Harris & Ewing when Emmett was U.S. Congressman.]

Note the time of death. Emmett died right after midnight, meaning the editor and the layout team likely had to stop the press, strip the first page of the newspaper and create a new layout at the last minute to make the first edition.

Note these nitpicky details. The article announcing Emmett’s death was placed just slightly over the fold, indicating this was a prominent person, even though Emmett’s congressional career was not distinguished. Anyone of less importance would have had a death announcement on another page, or the editor may have held the news for the next day.  Also: Whoever wrote the bare bones obituary had only the basic details about Emmett’s death at Pensacola Hospital. He or she wasn’t able to confirm anything else about Emmett or funeral plans in the middle of the night, and the details about Emmett’s life came directly from his congressional biography — obviously, the writer didn’t contact or interview local family members or friends to round out this last minute addition to the paper.

Finally, note the typos, which indicate that this death notice was very last minute. The other articles around Emmett’s death notice appear well edited. This is what reinforces my belief the editor stopped the presses for the May 29, 1918 paper for this last minute addition. 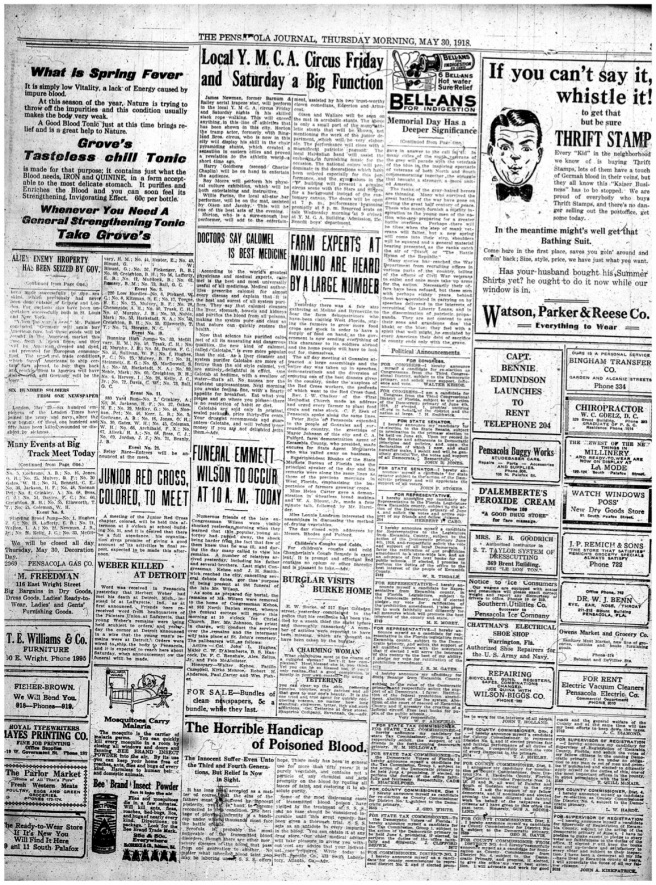 From the May 30, 1918 issue of The Pensacola Journal, page two. I think it is interesting to see the placement of Emmett’s funeral story the following day; I also wonder why (if he was so important to have three articles about his death in the paper) this item is moved off the front page.

Here is a close-up:

There was a lot of good background information to unpack (which I did in earlier posts, here and here).

Also, wasn’t it ironic that he was ‘popular’ and yet no one knew he was sick? I have several articles from The Pensacola Journal  during this time period of ‘popular’ friends of Emmett who were reported home sick or in the hospital. (I checked the West Florida newspapers for several weeks leading up to the day of Emmett’s death, and there is no mention of him being ill or hospitalized.) Previously, when Emmett was ill, it was mentioned in the paper, by the way. One example is provided below.  (He’d supposedly had rheumatism at one point — which was often the euphemism for something else.) 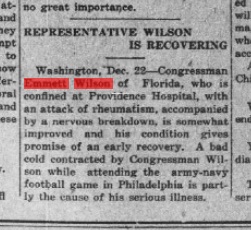 Another interesting item: Emmett was buried from the home of what appeared to be (at the time) a political frenemy — J. Walter Kehoe, and not from Emmett’s own home, or his brother Frank’s home in Pensacola.

As I was collecting any and all information about Emmett and his pals in those early days into Emmett’s research, I’d discovered that Kehoe had long coveted the office of U.S. Congressman. In fact, it was reported from Kehoe’s speeches and other news coverage that he considered the office his dream job. (The Florida Democratic party leadership didn’t agree; they liked him fine, but they always considered Kehoe as the runner-up to someone else whenever it came time to select the candidate for the office.) Emmett and Kehoe had an unusual relationship, and this was going to definitely be an interesting part of Emmett’s story to unwind. 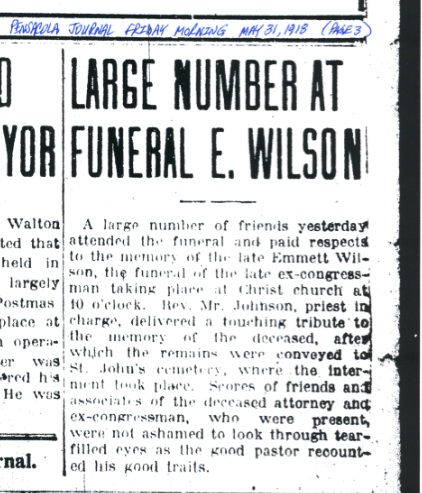 This was the post I wrote about this item a while back; also, this post included details pertaining to Emmett’s funeral, including the info featuring Emmett’s mortician (who sported a creepy mustache to boot).

The shorter third article ran on the third page, although in a good layout position (right hand page, under the number). The details are a bit general — which makes it hard to tell if the writer was actually present at the funeral. The subject is that a lot of people attended Emmett’s funeral.

The last sentence of the article made me believe the writer may have been there (noting several people weeping at the service), but with the feeling of ‘thank God this poor guy’s life is over and I can go on to my next assignment.’

I mean, look at the ‘article,’ folks. It is only three sentences long.

I’m curious about the Rev. Johnson, who gave a ‘touching tribute’ memorializing Emmett — I wonder who actually briefed Johnson about Emmett’s life, because although he was an Episcopalian, Emmett was not a regular churchgoer, and probably had few conversations with Johnson.

All this information was great, but it left me with many more questions than answers — and critically — I still didn’t know how Emmett died.

I knew I’d have to work backwards with this information in order to tell Emmett’s story — but I would need more details about himself, and his family. I reasoned that if this guy was important enough to garner three articles just about his death, there was more to this story.

The hard work was just getting started — I knew I’d have a long slog ahead to uncover Emmett’s story.  But I didn’t care. I was on a mission. I was possessed by Emmettism!