Although Grandfather has been living with my uncle Evelyn Maxwell in Pensacola, Grandfather prefers to be in Chipley. He trusts my father to take care of him, more than he does the doctors in Pensacola; he claims those doctors don’t understand him. But I think he would rather spend time with family in Chipley. I think he also misses my Mother; they were always close, and being in Chipley with my father gives him a sense of connection to my Mother.

Also, now that Cephas is a state senator, he constantly has people over at the house, and is busier than ever, as he also is keeping up with his law practice. All I’ve done for the past two months is live and breathe law, and I need a temporary break away from anything that demands a lot of heavy thinking and from a lot of people.

I don’t tell him, but I love my Grandfather. Besides my mother, he seems to be the only person who understands me. I don’t know why I don’t just tell him; maybe part of me is afraid he’s not reciprocate, though I know he feels the same about me. Maybe it is just because it seems unmanly.

Or maybe it is because I am afraid of how it would move me if I said it. The last time someone saw me that deeply moved… well, no matter. It was a long time ago. Best forgotten.

While in Chipley, I was going to spend as much time as possible with my Grandfather. We like the same things — a good game of chess, an hour or so at a fishing hole, and long walks. 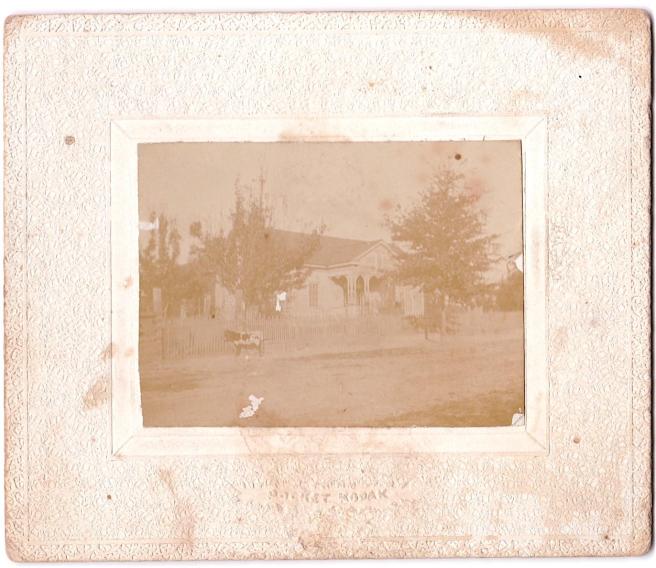 So on this slightly chill afternoon, we walk out together down Sixth Street, away from town. I support him with his arm through mine, down about a half mile until he tires out. We aren’t talking as we walk; we don’t really have to at this moment. We enjoy our time together and that’s enough.

After a while, he smiles at me, gestures with his head that he’s ready to head back to the house. It’s about 4 p.m.; this is his time that he spends on the porch, smoking his pipe, reading, enjoying a toddy.

He eases into the wicker armchair; his ashtray and pipe ready on the side table. I step into the house; into the kitchen and make his toddy — whiskey, warmed up gently in a pan, a little sugar, stirred gently, then poured into his silver tumbler.

Dr. F.C. Wilson’s original home, Now known as the Myers-Wilson House in Chipley, Florida. Built in 1895. Photo by the author.

I bring the toddy to Grandfather on the porch; he’s lit his pipe and is settled in. He nods his thanks to me.

“Now tell me about law school, Emmett,” he says, peering at me through the pipe smoke and over the top of his spectacles.

We talk about my classes and the texts I’m reading for the different professors. He asks which class I liked best thus far; I tell him I didn’t really have a preference, but I truly enjoy debating, both in the school club and in the classroom.

“Have you made many friends? What are they like?” Grandfather asks.

I tell him their names: Crawford, Fee, Fulgham, DeCottes, Carter. Grandfather, of course, knows many of my friends’ grandparents and parents. He nods approvingly as I tell him stories long games of chess on the porch; he chuckles at some of our antics and pranks. “I like being a part of this group,” I tell him, as I lean forward in my chair, looking at my hands on my knees. “I so rarely have felt so comfortable, and so accepted for myself.”

Grandfather says nothing for several minutes; I look at him. He is gazing out at the street. Maybe I shouldn’t have said that, I think to myself. He might not have liked that.

“You keep rather to yourself, don’t you, Emmett?” Grandfather asks turning towards me.

I look up at him, uncertain.

“There is no special young lady in the picture?”

“Did I ever tell you the story of how I met my first wife, your Mother’s mother, Sarah?” 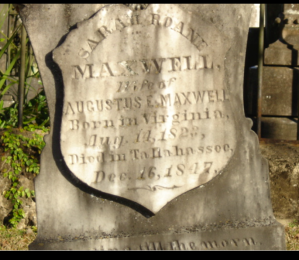 “Ah. Well. Sarah Roane Brockenbrough. A lovely, dark-haired, intelligent young lady of Charlottesville. Her father was the proctor at the University of Virginia. She was 20 years old when we got married. May 20, 1843, he said. I had already graduated from the University of Virginia Law School, back in 1841, but her father insisted that she be at least 20 when I asked for her hand in marriage. Also, I would probably have more money saved, be more able to support her comfortably, and so forth.”

Grandfather puffed a few moments on his pipe, reflecting.

“Yes,” he said. “By 1843, I had passed the bar in Eutaw, Alabama, Green County, you know, where your father’s people happened to be living at the time. I had a small practice going; it was enough, and Sarah’s father thought so too. So, I came back to Charlottesville in May, 1843, and married Sarah.”

“You didn’t stay long in Alabama, though,” I say.

“No. Only about two years. Your Aunt Lucy was born there, and your Mother was born in Tallahassee. We moved to Tallahassee in 1845. By then, I had political aspirations, and I knew that Florida, having just been admitted to the union, had unique opportunities that would help my career. Sarah was all for it, even though she knew it might be difficult. It was a hard journey for her, especially as she was expecting your Mother when we moved. But soon after establishing residency in Florida, I was named attorney general for the next two years.”

Grandfather nods. “September, 1847. Sarah had a very difficult time with that last birth; it is what led to her death less than three months later, right before Christmas, December 17.”

“And then, there was Grandmother Julia,” I add.

“Yes,” Grandfather said. “Julia Hawkes. A wonderful woman.  Julia understood that there would always be a special place in my heart for Sarah; she did not try to fill that, nor did she ever try to make me forget, because of course, I never would. Sarah was beloved to me; she still is. Julia was a kind, strong woman. She was exactly the kind of mother my children needed; and of course, I needed her too. Julia and I also loved each other.

“I was blessed with two wonderful women in my life, Emmett. I hope that one day, you will find someone to share your life.”

The screen door creaked noisily open; my stepmother Kate sticks her head around the door, and announces that supper was ready.

Grandfather and I thank her. Mother Kate goes back inside. Grandfather turns towards me, puts his pipe on the ashtray on the side table, then says:

“You know, Emmett, your father needed someone too, much like I did after Sarah died. Your father was brokenhearted, as I was. He needed to take care of his family, first and foremost, but when your Mother died, his heart was buried with her.”

I glance at my grandfather, who is looking at me, seriously.

Grandfather motions toward the closed front door, which my stepmother had just shut. “Kate Jordan also buried her heart with her first husband, John. I suppose you know that.”

“Don’t be so hard on your Father. I know you don’t have a close relationship to him. His way of dealing with his grief was to stuff it down into his work, and to do everything he could to keep his family going.  He was never looking to replace Elizabeth, but his family, you and your brothers and sisters, are most important to him. He was shocked. Well, we all were, and he just did what he thought best.

“Your father hasn’t gotten over the death of your mother, and I don’t think you have, either. That’s why he’s always distant. He can’t talk about this; but worse, he won’t try to talk about it. I think you are a lot like him in that regard.”

“I don’t…” I start to say, awkwardly. I am feeling things, uncomfortable thoughts, feelings rushing up from somewhere, deep inside, that will overwhelm me, and reduce me to something I hated, which was to be pitied, seen as weak, needy…my eyes started to sting a little. The idea of getting over my Mother…that would mean forgetting her. I could barely remember her voice anymore, or her look. I stood up abruptly, and went to the porch rail, and took a few breaths.

After a few minutes, I turn around and say, “Why are you saying these things to me, Grandfather?”

“If you don’t try to work through whatever it is that is bothering you deep inside, it will come back out of you in ways that can be harmful. Julia knew, when she married me, I was still mourning Sarah, and it helped to be able to talk to her about the things I felt. It didn’t diminish anything I still felt for Sarah, but it helped make things right inside of me, so that I could go on. Eventually, I came to appreciate Julia, and love her, as she so deserved. I don’t want to see you hampered by grief, or, to store things up inside of you that are bothering you.”

“We should probably go inside. Mother Kate is waiting supper on us.”

Grandfather nods, and I help him up from the chair. I hand him his cane; he walks slowly to the door. He pauses:

“Emmett. Don’t shut yourself off from those who love you and want to help you. They have your best interests at heart.”

“I have plenty of time for love, Grandfather. I don’t want to settle down with anyone right now; my priorities are to get through law school, and to be the top of my class. Then, my goals are to be a top-notch lawyer, and eventually, to take my place on the bench, the Florida Supreme Court, specifically. As you did.”

Grandfather smiles at me.

“And when I’m successful,” I continued, “I’ll settle down. Even you, yourself, were advised to settle down before you married Grandmother.”

“I have no doubt that you will go far, son. I believe it. But there is more to this life than mighty ambition. You don’t want to be alone at the end of your days. Don’t miss out on it, Emmett.”